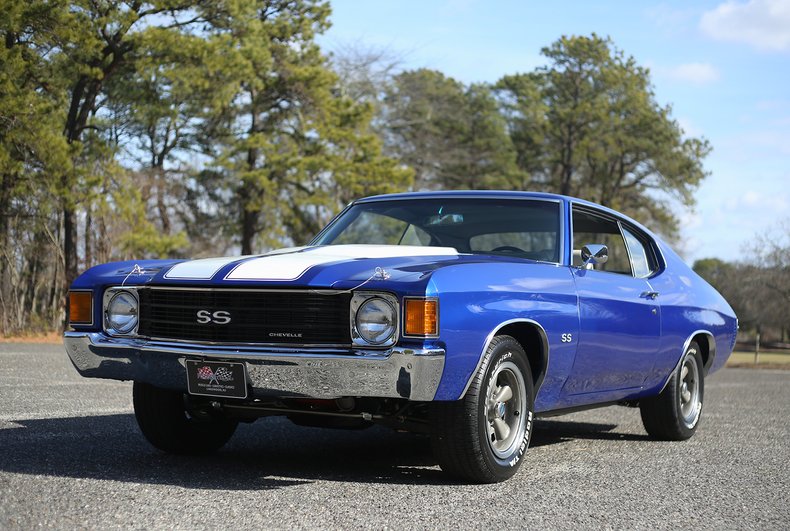 1972 Chevelles featured single-unit parking/side marker lights on their front fenders, outside of a revised twin-bar grille. All Malibus had concealed wipers. The SS equipment option requirements remained the same as those in 1971, any optional V8. The 1972 Chevelle series had wide enough appeal to qualify as America's second-best-selling car. Upscale versions were Malibus including the convertible models. More than 24,000 Malibu Sport Sedans were built, with a standard 307-cubic-inch V8 rated at 130 horsepower. With that V8, the Malibu Sport Coupe was the top seller by far starting at $2,923. Powertrain options included the 175-horsepower 350-cubic-inch V8 and 240-horsepower 402-cubic-inch (still known as a 396), as well as a 454 that produced 270 horsepower under the net rating system. Chevelles sold in California were not available with the 307 V8, but had a 350-cubic-inch engine. Through the 1970s, California cars often had different powertrains than those marketed in states with less-stringent emissions regulations.

The 1972 Chevelle SS had a top engine rated at 270 net hp conforming with GM's decree that all engines were to be rated at their net engine ratings. All other engines on the SS roster were unchanged from 1971. 1972 was the last year for the cowl induction option for the 454 cid engine and was not even mentioned in the 1972 Chevelle brochure.