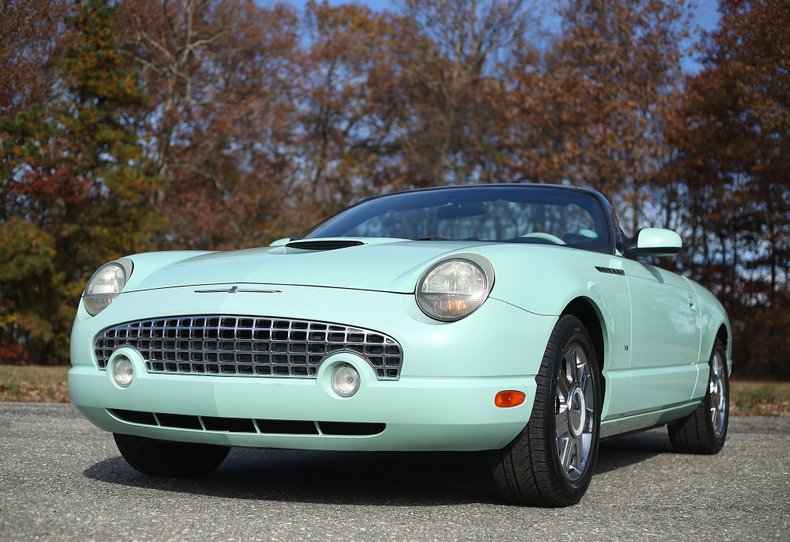 Without a doubt, the revived 2004 Ford Thunderbird scores big on the appearance scale, drawing an abundance of envious glances. Everything is calm, natural, and intuitive, anyone can hop into this T-Bird and feel at home within two minutes. Finished in stunning Vintage Mint Green over two-tone Performance White-Black leather, this Thunderbird delivers some authority when you step into the throttle, as there is a 280 horsepower 3.9L V8 under the hood. This is a gorgeous rendition of an old classic that gives new meaning to the term personal luxury car. It has so much style that a simple drive becomes an event, a celebration, a parade. It should bring back the spirit of American chrome in a big way!

The 2004 Thunderbird has the same long-hood/short-rear-deck styling theme of the 1950s two-seat models. It also has a similar egg crate-style grille, hood scoop, simulated air vents and 1950s-style T-Bird portholes for the removable $2,500 hard top. Like the original, the 2004 Thunderbird has a front-engine, rear-drive layout. The 1950s two-seat T-Bird was heavy, and so is the 2004 model at nearly 3,800 pounds. However, the 280hp V8 and responsive five-speed automatic transmission work to whisk the car to 60 mph in 6.5 seconds, and theres strong acceleration for merging and passing.