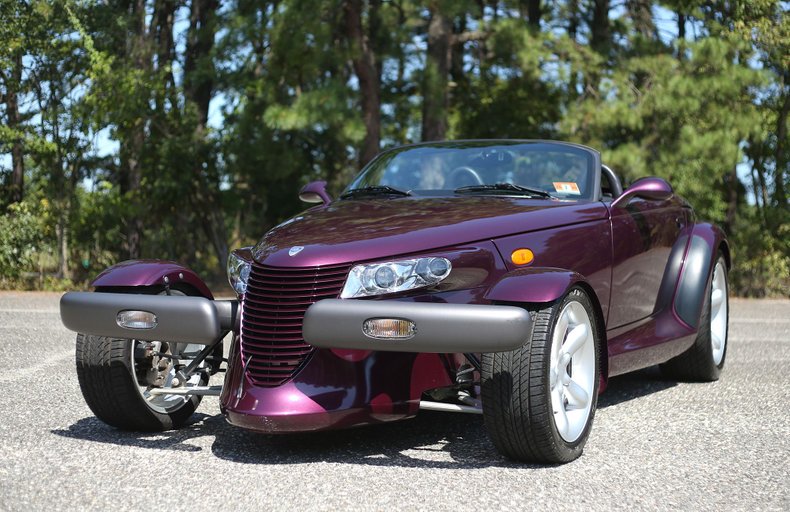 1997 Prowler Convertible - This 952 original mile Prowler is Chryslers example of the modern day " Hot Rod " or " Sportster " type vhichle. One of the most striking design features of the Prowler are the open, Indy racer-style front wheels. The Prowlers power was from the Chrysler SOHC V6 engine and backed by a four speed Autostick semi - automatic transmission. The transmission was located at the rear of the vehicle and joined to the engine by a torque tube that rotated at engine speed, an arrangement similar to that used by the C5 Corvette, Porsche 944, and Alfa Romeo 75, and helped to facilitate a desirable 50-50 front-rear weight distribution. The Prowler was the first rear-wheel drive Plymouth since the 1989 Plymouth Gran Fury and would stand as the last Plymouth model with that layout. Only 457 Prowlers were built in the 1997 model year.

This Prowler is finished in it's one year only Purple Metallic paint over gray leather bucket seats. The manual convertible soft top is finished in black. The Prowler was equipped with many features that allowed it to be used as a daily driver. These features included keyless entry, power windows and door locks, dual airbags, leather-trimmed bucket seats, air conditioning with manual controls, an AM/FM stereo with cassette player (a multi-disc CD changer was an available option as well) and a high-fidelity sound system, a leather-wrapped steering wheel with audio system controls mounted on the rear of the wheel, a color-keyed instrument panel bezel painted to match the exterior color of the Prowler, a digital odometer and full instrumentation.

Also included is the $5,000 dollar Prowler trailer that was available for purchase from Chrysler dealers. These trailers resembled the back end of a Prowler and had smaller versions of the five-spoke wheels found on the car. They could be ordered to match a car's factory color. The cars were equipped with a trailer hitch to accommodate the trailer option.

With only 952 original miles and a clean car fax this 1997 Prowler is sure to fit the bill for a collector who appreciates a well preserved and well maintained investment grade sports car. She runs and drives great and really sounds good when cruising the open roads. You have retro - styled looks and modern performance!