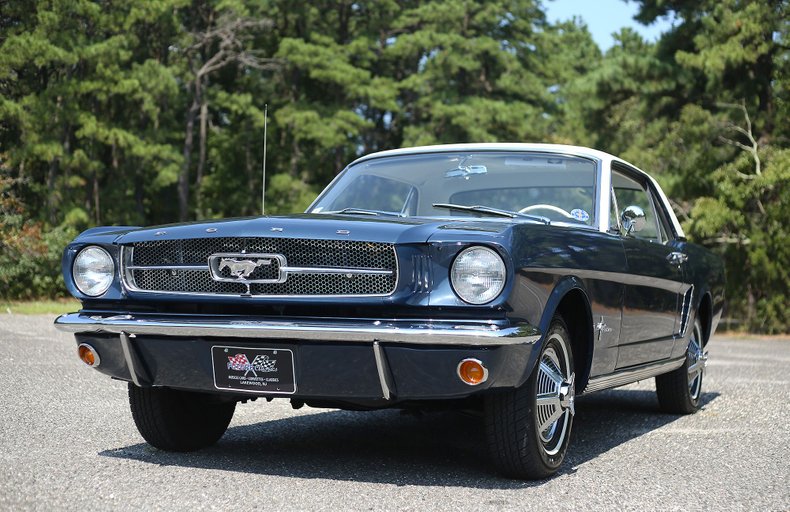 The introduction of the Mustang created a new class of automobile known as the pony car. The Mustang's styling, with its long hood and short deck, proved wildly popular and inspired a host of competition.Here's a 1965 Mustang that takes you back to the earliest days of Mustang mania. This gorgeous Caspian Blue pony's power is coming from the " T " code 200 CI 6 engine which is backed by the C -4 automatic transmission. Equipped with power steering, pushbutton AM radio, day / night mirror, center console, dual outside mirrors, front seat belts, and finished off with beautiful white bucket seats makes this 65 Mustang a real head turner. Under the hood is highlighted by the correct components and displays very well with correct wires, clamps, hoses, and proper decals as you would have from the factory. A recent tune up was performed with a new correct fuel pump, oil and filter, plugs, wires etc. The original style carburetor was also rebuilt.

This Mustangs restoration speaks for it's self as the attention to detail is second to none and nothing was overlooked. The trunk compartment is highly detailed with correct spare & jack assembly, trunk mat, spare tire instruction details and so on. The exterior was refinished to show quality standard from the gorgeous Caspian blue paint with white vinyl top to all new glass, trim, chrome, and stainless. The detail even goes down to the Ford headlights and windshield squirter nozzles which highlights the show quality throughout. This Pony rides on the original 13 inch rims with factory hubcaps and spinners accompanied by new white wall tires. Overall, this 62K actual mile Mustang is not only gorgeous to look at but a pleasure to drive and she rides down the road smooth and gets all the looks from it's striking color combination.

The Mustang stormed into automotive history as a new kind of American compact with sporty styling, bucket seats, a floor shifter, a low sticker price and a long of list of options to adhere to Ford's “Made to be made by you” advertising. Because the Mustang was introduced during Ford's 1964 production year, the hardtops and convertibles produced between March and August 1964 included a number of 1964 characteristics, many of them related to the generator-charging system, like large horns mounted low on the engine-compartment supports, “GEN” marking for the instrument-panel warning light, and a brake-light warning switch mounted in the front of the master cylinder. During the extended 1965 model year, which ran from mid-April 1964 to mid-August 1965, Ford sold 680,000 Mustangs, including more than 121,500 during the early four-month period that is recognized as 1964-1/2 by Mustang enthusiasts.