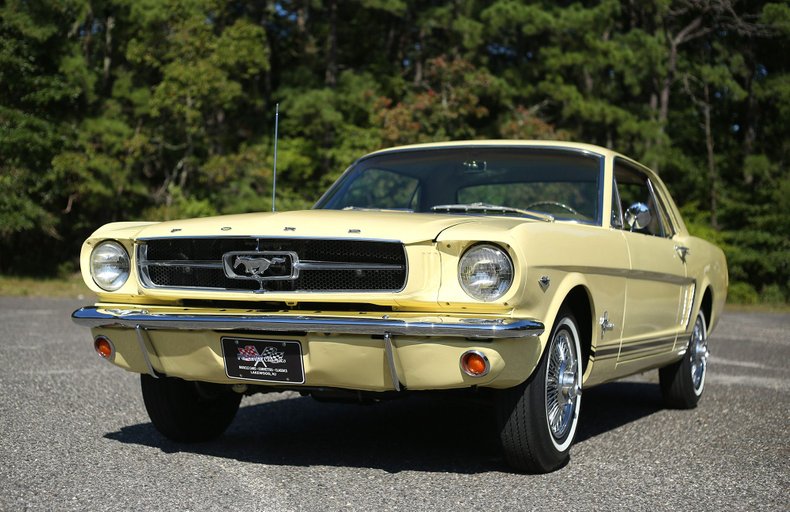 1964 1/2 Mustang Coupe - The first Ford Mustang rolled off the assembly line on March 9, 1964, and a little over a month later, on April 17, it was introduced to the public at the New York World's Fair at Flushing Meadows Park in Queens, New York. Before the day was over, Ford had secured 22,000 orders for the vehicle at dealerships across the country. As such, the 1964 Mustang was considered an instant hit with consumers. This one retains its good looks thanks to the help of it's long time Oklahoma owner, who performed the rotisserie restoration on this factory D code Mustang. The D code Mustang was considered the top dog in 1964 featuring the 289 V8 engine with 4 BBL carburetor and aluminum water pump. This car was equipped with a 4 - speed transmission, center console, manual brakes, generator, pushbutton AM radio ( Now Digital ), rally - pac gauges, driver side mirror, front seat belts, and a rumbling dual exhaust system. One look under the hood and you can see a masterpiece that was detailed to AACA show standards. If under the hood wasn't enough take a peek underneath the car and you can see how far the attention to detail went with all factory correct markings and finishes.

It's obvious that Ford has always sweated the details on the Mustang and with its completely new brightwork and bolt-on pieces, this car presents a finished, high quality appearance that goes far beyond its nice paint and fresh decals. Up front, a stainless grille frames a pristine corralled pony emblem with deep set headlights that cap aggressive, ridged fenders. Below that grille a show-worthy chrome bumper hangs above wide-set chrome trimmed parking lights. At the top of the car, like-new glass is framed by bright stainless trim and new stainless wipers. At the sides of the car, fresh “289” badges complement chrome door handles and aggressive mesh-filled side scoops. At the back of the car, glossy peaked fenders frame segmented tail lights and a highly detailed Mustang fuel cap. At the corners, 14-inch steel wheels are covered by OEM wire wheel covers with spinners that feature a center cap. Those wheels are wrapped in 14 inch whitewall tires for an appropriately vintage look.

The Mustang stormed into automotive history as a new kind of American compact with sporty styling, bucket seats, a floor shifter, a low sticker price and a long of list of options to adhere to Ford's “Made to be made by you” advertising. Because the Mustang was introduced during Ford's 1964 production year, the hardtops and convertibles produced between March and August 1964 included a number of 1964 characteristics, many of them related to the generator-charging system, like large horns mounted low on the engine-compartment supports, “GEN” marking for the instrument-panel warning light, and a brake-light warning switch mounted in the front of the master cylinder. During the extended 1965 model year, which ran from mid-April 1964 to mid-August 1965, Ford sold 680,000 Mustangs, including more than 121,500 during the early four-month period that is recognized as 1964-1/2 by Mustang enthusiasts.

Overall, this beautiful D code Mustang has been well cared for and has received a top notch complete restoration. This pony comes with a nicely detailed photo album which documents the process even further. This is a great investment grade Mustang being a D code and equipped with a 4 - speed transmission. So, what are you waiting for? Pick up the phone, park this '64 1/2 Mustang in your garage today!