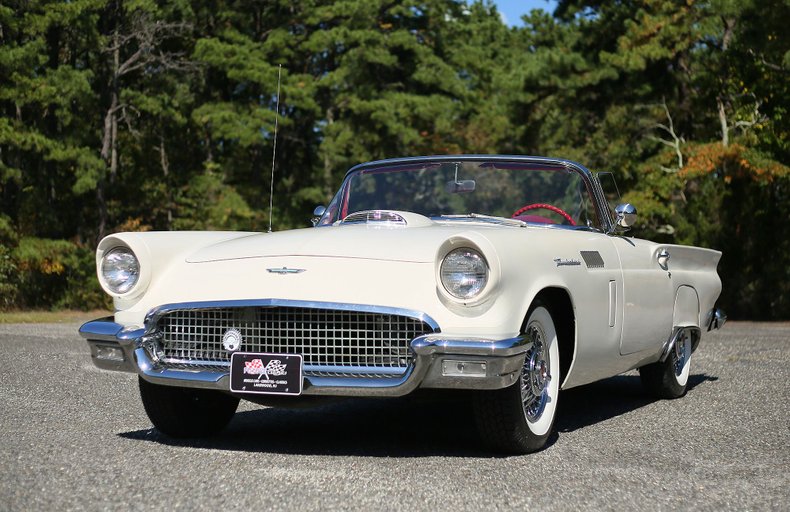 Two cars literally defined the newfound freedom of the 1950s: the Chevrolet Corvette and the Ford Thunderbird. Eventually Chevrolet took their Corvette to the racetrack, while Ford continued to turn their Thunderbird into the ultimate boulevard king. Now, over sixty years later, first generation Corvettes are cool, but first generation Thunderbirds are more endearing. If you're looking for a sweet 50s-era classic that's valuable, fun to drive and has the ability to turn Main Street into a parade route, Future Classics LLC is your kind of place. And if you want to be the star of that parade, this mostly original 37K mile Thunderbird, backing a 312 cubic inch V8 with a correct Ford-O-Matic transmission, is definitely your kind of classic!

The Thunderbird was Ford's refined response to Chevrolet's crude Corvette. And when introduced in 1955, it outsold Chevy's newly minted halo by almost 24 to 1. Part of the reason for that big success was the car's versatile mix of American substance and European aesthetic. At the front of this 'bird, a stainless egg-crate grille rides between clean headlights, chrome-trimmed parking lamps, an intricate header emblem and a bulleted bumper that bends around peaked fenders. Between those fenders, a classy hood scoop leads the eye to a wraparound windshield that's reflected in a correct chrome mirror, cleared by polished stainless wipers and framed in thick chrome trim. At the top of that trim, a Colonial White hardtop latches down as a part of Ford's innovative Port Hole system. Below those roofs, sculpted door handles and stainless-trimmed fender skirts perfectly complement sedate louvers and flowing “Thunderbird” scripts. And at the back of the car, chrome-trimmed, jet-inspired taillights center an intricate trunk emblem above a second wraparound bumper.

Colonial White paint is legendary for its characteristically upscale feel. And when paired with this Thunderbird's bright white hardtop and rich red vinyl interior, it creates the perfect culmination of class and sophistication. Thanks to the car's storage, its pleated bench seat is livable for years to come. There's tight carpet that, thanks to thick, color-keyed mats, features a fluffy red tint. Front and center, classy telemetry and a familiar Town and Country radio ( Converted Radio ) look great inside engine-turned bezels. In the middle of the floor, a chrome shifter feels both firm and precise. In front of the driver, a glossy steering wheel spins a chrome horn ring around a mirrored steering column. At the sides of the passengers, rich red door panels center perfectly placed armrests below, engine-turned trim. And behind the seat, a correct trunk centers a full-size spare tire between a fresh mat and old school jack.

If there's one phrase that describes this awesome classic, it would be “luxury sport”. That may sound a bit cliché, but it's true. There's a reason these cars have built a legacy of cruising, seeing, being seen and looking fantastic. Just imagine sliding in to this 'bird's comfy vinyl seats, firing up its throaty V8 and chasing the sun down your favorite two-lane black top -- it doesn't get much better than that!