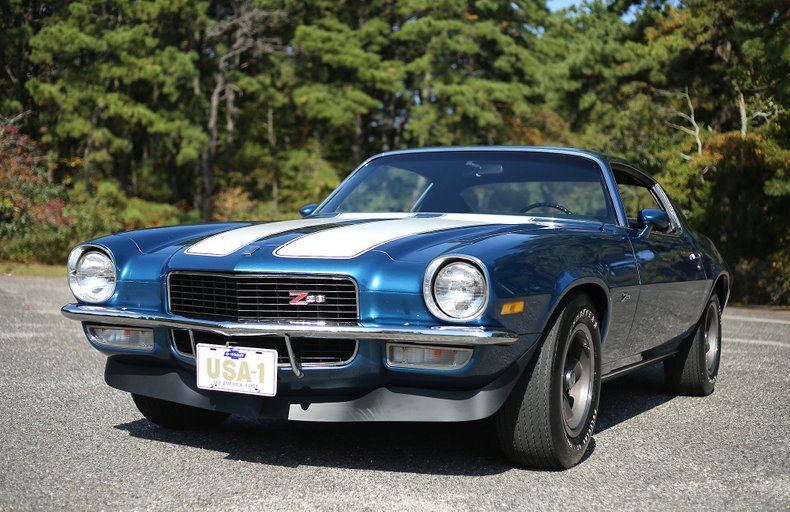 The popularity of second generation Camaros is certainly growing. Ask any young enthusiast what their favorite year panther is and you're just as likely to hear “1970” “1973” or “1980” as “1967”, “1968” or “1969”. But here's the kicker: at this point in time, there simply aren't that many really nice 2nd gen's on the market. And that's why it's a great idea to get ahead of the curve by investing a little money in this authentic Z28. Sporting it's 350/4-speed drivetrain and Mulsanne Blue over Black aesthetics, this Z is a vision of SCCA-inspired performance. And, as a well maintained cruiser that's benefitted from a professional, ground-up restoration, it's a solid piece of classic car potential that's available for relatively modest money!

A simple breakdown of this Camaro's Cowl Tag confirms that it originally left GM's Norwood manufacturing facility as a Black on Mulsanne Blue Z28. Treated to a ground up restoration in the mid 2000's this 2nd gen Z28 really shows well. The gorgeous Mulsanne Blue paint really pops being accented with white racing stripes. The fit and finish of this Camaro will fit the bill for any Camaro collector.

Chevrolet did a particularly good job designing tasteful ornamentation for the second generation Camaro. At the front of this coupe, a stainless-trimmed grille hangs a bright “Z28” emblem and guarded chrome bumper in front of clear parking lamps, a factory chin spoiler and stainless-trimmed headlights. Behind that grille, a flat hood founds tinted and stainless-trimmed glass between a chrome header emblem and body-matched mirrors. At the sides are factory door handles and conservative “Z28” badging between broad rocker guards and flush marker lamps. And at the back of that, a Camaro-branded decklid hangs a “Z28” branded ducktail above a mirrored bumper, stainless-trimmed taillights and a chrome trunk lock.

Tilt this Chevy's domed hood and you'll find 350 cubic inches of all-American small block. A lot of car buffs rave about the first generation Z/28 and Chevrolet's legendary DZ 302. But in reality, the LT-1 350 found under this Camaro's hood is a much better engine. Fitted with an LT-1 exclusive CTB suffix stamp, this awesome small block utilizes a forged crank, domed pistons, a high performance cam and solid lifters to turn stout 11 to 1 compression into 360 horsepower! At the top of that hot engine, air is forced through a fully detailed dual snorkel air cleaner to a familiar Holley 780 carburetor and a high performance Winter aluminum intake. At the sides of that intake, finned aluminum valve covers loom date coded black plug wires above correct cast iron exhaust manifolds with correct shielding. And at the back of that intake, a standard points distributor rides beside a fully functional wiper motor and a gold Delco Moraine brake booster. Cooling is supplied by a heavy duty radiator which sends water past a correctly shrouded seven blade fan via reproduction GM hoses and tower clamps. And spark is supplied by a reproduction R89 Delco Energizer battery that's wired to a correct 37 amp alternator that displays a deep groove pulley. Naturally, the cars satin black engine bay and Chevy orange block are clean and appear to have been immaculately maintained throughout the years. And details like original decals, under hood light, a functional windshield washer system and functional A.I.R. smog equipment are in the kind of excellent, showroom fresh condition that ensures both big points and great performance.

In 1970, the best transmission you could equip your Z28 with was a tough Muncie 4-speed, and that's exactly what trails this Camaro's stout V8. Naturally, that gear slinger spins a correct posi rear axle that's fitted with 3.73 gears. That driveline rides on a correct F41 Sport Suspension, which combines factory-style power steering with correct power front disc and rear drum brakes. That suspension is complimented with a factory OE style exhaust with correct chrome tips. Riding on correct Z28 wheels, which spin F - 60 15 Polyglas tires around dent-free trim rings and blue bowtie center caps

Open the car's doors and you'll find a mostly original GM standard black vinyl interior which is both stylish and simple. That interior is built around well-maintained strato bucket seats with straight and solid frames to provide a comfortable and supportive ride. At the top of those seats a pliable black headliner, which is stretched tightly from the car's windshield to its rear package tray, anchors an original round dome light. At the bottom of those seats, great looking black carpet is protected by factory optioned rubber floor mats. And between those seats, props a chrome Hurst shifter below a black shift knob. The car's vitals are monitored by a surprisingly straight original dash which hangs a Z28 specific 8,000 RPM tachometer behind a chrome trimmed instrument panel and an AM/FM radio. The driver stays connected to the road via a great looking original steering wheel that's complete with an Bowtie branded horn button. And cargo is carried in a solid, detailed trunk which hangs original decklid decals over a correct jack, a optional aux. trunk light and a full-size polyglas spare tire.

This investment grade Z28 is one of the best combinations of performance and style Detroit ever produced. And when you factor in it's achievable price, it easily becomes a desirable 2nd Gen Camaro. As a mostly original, numbers matching classic it would be the perfect car for any discerning Chevrolet enthusiast, or a unique centerpiece for any exclusive muscle car collection!