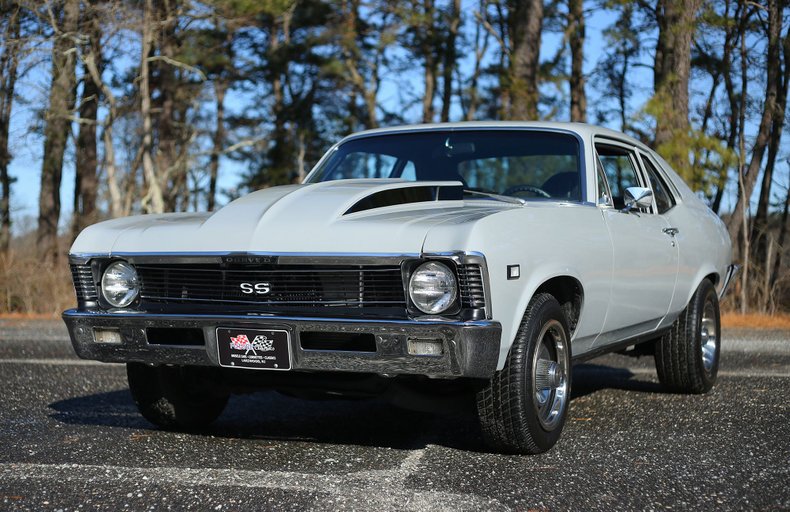 The 1968 Chevrolet Chevy II Nova was fully redesigned on a longer 111-inch wheelbase that gave Chevy's compacts a chassis that was just one inch shorter than that of its midsize Chevelle coupe.
The 1968 Chevrolet Chevy II Nova had a freshly contoured body that featured a new "tunnel effect" roofline. Bodies were longer, lower, and wider, displaying the trendy long-hood/short-deck shape. Chevrolet boasted of its "clean sweep in styling, performance and economy" with the 1968 Nova.

With the Chevrolet Camaro and Chevelle lines competing for sporty-coupe shoppers, production of the Nova Super Sport dropped to 6,571 from over 10,000 for 1967.

Still, the Nova SS offered plenty of fun. A 295-horsepower Turbo-Fire 350-cubic-inch V-8 was standard. There were simulated air intakes on the hood, black accents on the grille and decklid panel, and special emblems and badges. The Nova SS also included a deluxe steering wheel, red-stripe wide-oval tires, and stiffer suspension. A floor-shifted three-speed gearbox was available, as were a four-speed manaul and Powerglide automatic.

Featured here is one ba ba ba BAD 68 Nova. Powered by a built 496 Stroker engine with 550 HP. Backed by a heavy duty automatic transmission. Spinning the tires is a 12 bolt rear axle. The all metal body is finished in Porsche Fashion Gray paint. The cosmetics of the body are all new including cowl hood, bumpers, grill, bezels, door handles, weather strips etc. The built 496 Stroker motor is equipped with Performance " X " heads, 11:1 pistons, double roller chain, and a steel crank. An aluminum radiator keeps things running cool while the Performer intake and Holley Carburetor keep the horsepower numbers up. Exhaust flows through big headers and a dual exhaust system. Stopping power is supplied from power brakes.

Inside this 68 Nova you will find new door panels, seat covers, headliner, carpet, door sills etc. RPM's are monitored from a BOSCH tachometer while your water and oil are supplied from lower dash gauges. Gear choice is selected from the B & M ratchet shifter. The black bucket seat interior looks great against the Fashion Gray exterior paint. The Nova is equipped with front seat belts only. The rear trunk compartment is carpeted and holds down the spare tire. A new AM/FM radio was installed during the restoration. Overall, any and everything that could be replaced was done.

This 68 Nova has had a ton of money spent on it and anyone that has restored a muscle car from the ground up knows that the asking price does not cover the cost of restoration. Now that all the hard work is done it is time for you to get in and have the ride of your life as this monster Nova will have you smiling from ear to ear when you find the gas pedal. Miscellaneous receipts included with the sale.