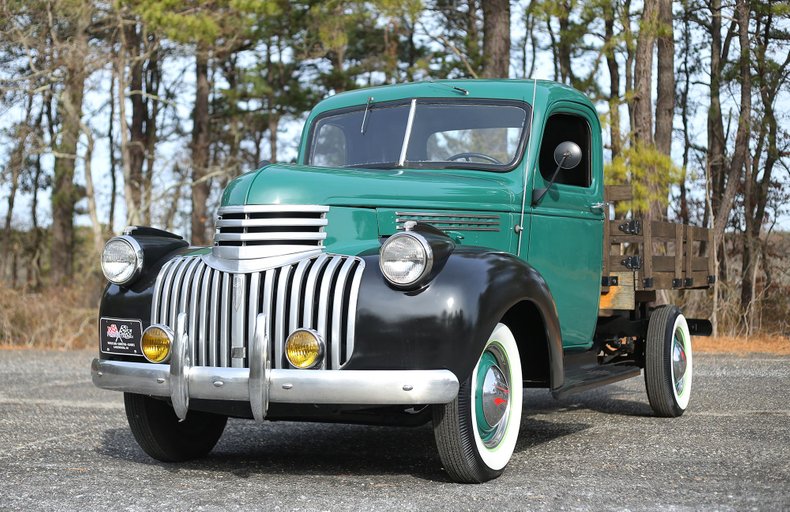 The 1941 Chevrolet AK Series pickup brought to the General Motors light-truck lineup a new sense of strength in design and engineering. Knowing their products might soon be rolling into World War II probably encouraged truckmakers to design stronger, more versatile new models for the early 1940s. One such was the 1941 Chevrolet commercial lineup.

It was the broadest commercial lineup in Chevy history, comprising two engines, three transmissions, five axle ratios, and nine wheelbases. The 1941 truck design was related to the passenger cars, but by no means identical and far removed from the very car-like 1941 Chevrolet Series AG sedan delivery and coupe "pickups."

Bevelled grille bars were horizontal in the upper section, vertical below; headlamps sunk partly into the front fenders. All this added up to quite a streamlined Chevy, more modern looking than the T-series Dodge and the 1941 Ford, if not quite as sleek as the new Studebaker M-series or International's K-line.

A crank-open windshield and metal-framed door windows were new features, while the wide, comfortable seat used a latex-bound hair pad on coil springs. Pickups came in 1/2- and 3/4-ton versions, the latter on a longer 125-inch wheelbase. Boxes were heavy-gauge steel with a durable wooden floor, reinforced and protected with steel skid strips.

This 1941 Chevrolet Pickup is equipped with an original 6 cylinder, 216 engine 6-volt system, with numbers matching. The truck was restored 10 years ago, and there"s no rust. Chassis and Frame Rails are solid. The engine and transmission were rebuilt. All new parts including: Starter, Fuel Pump, Battery, Coker White Walls, and much more. Would make a great Rat Rod, could be kept as is for car shows, farm use, or as a great advertising piece for a business.

The AK series was appearance split from past Chevrolet vehicles where the passenger autos and pickup trucks shared a common look, as showed in the Chevrolet Master truck. There was an all new appearance in The Chevrolet Deluxe when it was presented in 1941, and shared quite a bit of its mechanicals with the third generation Suburban.