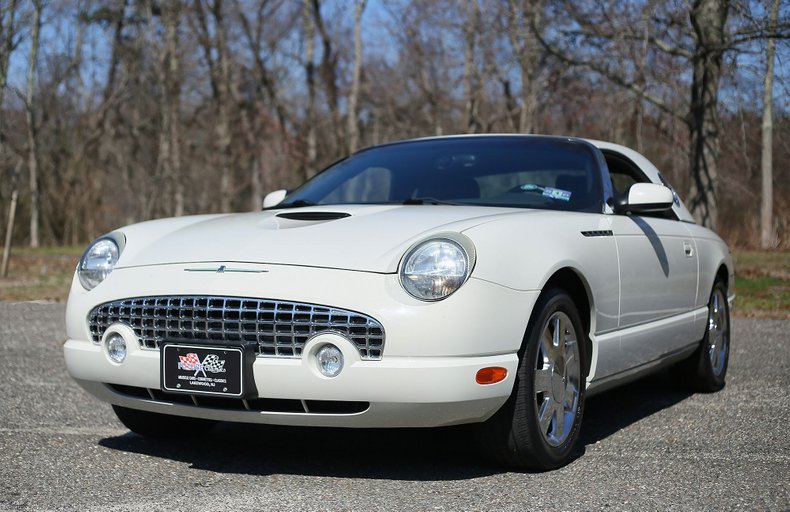 Two cars literally defined the newfound freedom of the 1950s: the Chevrolet Corvette and the Ford Thunderbird. Eventually Chevrolet took their Corvette to the racetrack, while Ford continued to turn their Thunderbird into the ultimate boulevard king. Now, over sixty years later, Corvettes are regarded as some of the best curve carvers in the world, and Thunderbirds, like this low mile stunner, are still turning heads on Main Street. If you looked at a brand-new Thunderbird in 1955 but couldn't swing it, and looked again in 2002 but the timing just wasn't right, 2020 is your year! So, if you're still looking to hit the road in refined style, the third time's a charm!

Ford's sensational Thunderbird sprang to life as a 1955 halo car that fired imaginations and eventually became a legend. In 1999, Dearborn's favorite son decided it would honor that original by building a new model to turn just as many heads. And, within three years, the convertible you see here, affectionately dubbed the 'retrobird', was rolling through production. This gorgeous drop-top, originally sold in 2002, has been continually serviced while residing in the previous owners garage. Backed by a clean CarFax, the car's Whisper White body shines nice and compliments the cars body lines. This Ford Thunderbird is definitely a nice factory cruisers!

When Ford debuted the eleventh generation Thunderbird it introduced a car that was faithful to the original concept in virtually every way. Power for this classy cruiser comes from a 3.9 liter, 32-valve DOHC V8 that was developed by former captive subsidiary Jaguar. Code-named AJ35, the Ford-specific mill utilizes variable valve timing, fracture-split and forged rods, 1-piece cams, and a reinforced intake to twist 252 smooth horses into 267 lb./ft. of stout torque. More of a 'comfortable cruiser' than 'flat-out sports car', the 'retrobird' never pretended to be a Corvette or Porsche competitor. That said, 0-60 comes at a very respectable seven seconds, and the car's silky powerplant delivers enough grunt to provide fun and responsive driving characteristics. Aesthetically, the entire engine is hidden under an attractive plastic shroud which substitutes a classic “Thunderbird” script and silver “V8” branding for traditional views of its componentry. However, you can still plainly see how well everything has been maintained and, with a turn of the key, the cylinders settle into a restrained hum of power.

In the late 1990s and early 2000s Ford developed one global rear wheel drive platform, code-named DEW, that was set to underpin everything from select Jaguars to the fifth generation Mustang. Those competent roots supply this awesome Thunderbird with a sophisticated independent suspension, which utilizes a host of weight saving technology to provide a smooth ride and composed road manners. Behind the aluminum engine, a 5-speed automatic transmission sends power to a fresh Ford rear end that's fitted with stout, 2.69 gears. At the corners of the chassis, 4-wheel disc brakes, which are aided by standard antilock and traction control systems, ride behind chrome, 17-inch wheels and sticky Michelin Pilots. All that world-class engineering results in a sturdy convertible that translates relaxed sportiness into an excellent combination of cushy comfort and tight handling. And when you throw your favorite road at this drop-top, it'll chew it up, spit it out and coddle you in the kind of luxury vintage T-bird owners merely dream of experiencing.

Ford began the 21st century by producing some of the most impressive and detail-oriented interiors to ever hit the market. And the Midnight Black cockpit in this roadster has to be one of their cleanest designs. The driver and passenger are treated to heated, power-adjustable seats. Below those thrones, day-one-fresh carpet is protected by color-keyed floor mats and bordered by cool “Ford Thunderbird” sill plates. Above those sills, winged door panels hang slick metal trim behind controls for both power windows and power door locks. In front of those panels, a highly detailed dash anchors Turquoise-tipped needles between satin-face gauges, a 6-disc CD changer and attractive metal trim. At the base of that dash, a great looking console centers dual-zone climate control on a leather-wrapped shift knob and sculpted waterfall back panel. In front of the driver, a leather-wrapped wheel spins a pristine, teal-inlayed emblem around a tilting and telescoping column. And behind the passengers, a fully finished trunk features enough luggage room for a quick weekend getaway.

If there's one phrase that describes this crisp Thunderbird, it would be “luxury sport”. It may sound a little cliché, but it's true. Like their predecessors, these cars have built a legacy of cruising, seeing, being seen and looking fantastic. Just imagine sitting down in the car's comfy leather seats, firing up its throaty V8 and chasing the sun down your favorite 2-lane black top. It doesn't get much better than that!