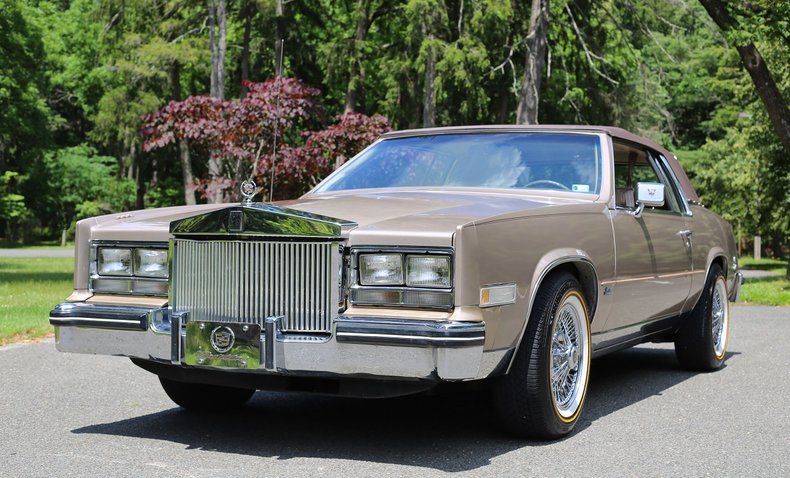 Perhaps you remember the luxury car wars waged between Cadillac and Lincoln in the waning days of traditional American sedans. Outside some upscale restaurant one valet retrieves a Lincoln Mark VII while another retrieves a Cadillac Eldorado. As the respective owners climb in, the Lincoln driver glances over at the Cadillac's folding top and says, “Whoa, that thing is cool!” And this Caddy motors off a firm winner of the night's battle of egos. The name Eldorado began as the Spanish words "el dorado" meaning “the gilded one” or “the golden one”. And despite the title's eventual reference to the famous lost city, it's also tied to some not-so-unattainable treasure. A grand tourer whose rarity equals its comfort, this awesome 1985 Eldorado is ready for both the open road and a trip to your favorite cruise spot! If you're in the market for a low buck collector car that can be driven and enjoyed to the fullest extent, you've officially struck gold.

Looking solid in its coat of correct Light Sandstone paint, this Eldorado has been well-maintained by very fussy parents, and currently shows just 64,493 actual miles. The car spent most of its life in the garage, and one close look reveals it has never seen anything close to a harsh winter season. Aesthetically, there's no sign of body rust or significant damage anywhere. Its long fenders are straight, its door bottoms are clean, and everything is nicely presented with a subtle brown pinstripe that runs from the headlights all the way to the tail lights. As far as fit and finish go, the big doors open easily, close properly and seal up tight. The fender extensions that surround those aforementioned tail lights appear in correct form and factory solidity. Equally as surprising as the body's condition is the absolutely brilliant brown vinyl top, which shows no major stains or discoloration, and retains tight and pliable seams. The big chrome grille and bumpers, relics of an era that's behind us, are in excellent condition perfectly matching the stainless strips that line the car's rocker panels. The long stainless strips that begin on the front fenders and stretch to the rear of the roof are bright and shiny, as is the rest of the window trim. Glass is good all around; and all the car's original emblems are present and accounted for.

Power comes from a reliable 4.1 liter HT-4100 V8 ( Equipped with the updated version with a letter from Cadillac ) which provides an excellent mix of torquey thrust and thrifty fuel economy. This engine, noted for its advanced aluminum block, traditional cast iron heads and beefy 8.5 to 1 compression, is a great luxury car powerplant that happily goes about its business without troubling the driver or passengers. And while you're not likely to take home many street racing victories, you're certainly not going to be late either. The condition of the car's engine bay is further testament to its easy life away from the harsh winter. There's a ton of original parts in here, and a distinct lack of the rigged or hijacked stuff that's common when one of these cruisers falls into the hands of someone who can't afford proper service. And everything is in operational condition with items like undamaged coolant and washer fluid bottles and good belts and hoses. If there's a better long-distance cruiser than this, I can't imagine what it is!

This car's beige leather interior is what today's marketers would call “traditional American luxury.” With wide seat cushions made of glove-soft leather, it's like your grandmother's living room on wheels. The front buckets are comfortable, if not especially supportive in the corners; but that's OK because this car is designed to hammer across the plains of Texas at 80MPH, not carve curves. The wood-trimmed dash and steering wheel are in excellent condition with a full array of digital gauges keeping an eye on the car's mechanicals. Electronic climate control was standard equipment, and at the push of a button, it'll also tell you about the temperature outside. In back, there's an almost limousine-like amount of legroom below a wide beige leather couch that's so big you'll have a new place to let house guests spend the night. Everything works from the power windows to the climate control. And if you don't feel just a little important behind the wheel of this Eldorado, it's certainly not the car's fault.

These Cadillacs really were among the last of the traditional American luxury cars, where isolation from the road was paramount and handling dynamics were a bit of an afterthought. That said, they CAN be a lot of fun to drive and they STILL have a quality about them that makes you feel like you're behind the wheel of something special. Not a lot of these cars were saved as collector's items, making clean, low-mileage specimens very difficult to find. And if you're talking acres of cool per dollar, this Eldorado is the reigning champion!