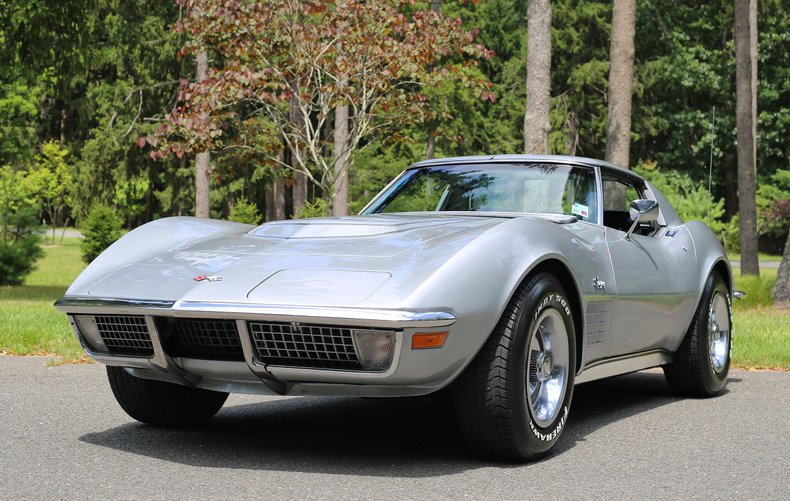 By now, you've probably memorized most of the Corvette story. From Zora Arkus-Duntov to the Mako Shark to the bankruptcy years, each of the car's seven generations has its own key moments and cast of colorful characters. At this point, the third generation Corvette accounts for the middle section of the brand's lineage and, looking back, it's a remarkably appropriate car to hold that place. With visible nods to both Chevrolet's heritage and future, examples like this sweet Cortez Silver coupe are finding firm footing in a collector market that will inevitably grow stronger. This numbers-matching Stingray features options like a storied LT1, a tough #'s matching Muncie 4-speed and disc brakes that make it both fun and surprisingly capable. There's never a bad time to buy a good Corvette, so if you're looking to add an impressive LT1 C3 to your collection, you've come to the right place!

The Boss 302 was a 290hp screamer available in the Mustang and Cougar Eliminator. Over at Chevrolet, Zora-Arkus Duntov was working on a new small-block, the mighty mouse, if you will, and unleashed a 370hp engine for the new 1970 Corvette in the fall of 1969. Called LT-1, Zora had no idea how legendary this engine would become. The 1970 LT-1 is not only a powerful engine, it's also great looking with a high-rise aluminum intake, a gigantic Holley carburetor, finned aluminum rocker arm covers and a chrome open-element air cleaner with a silver and red foil label that reads, "350 Turbo-Fire 370 Horsepower." The LT-1 made most of its power at 6,000 rpm and could gleefully zoom to 6,500 rpm with nary a burp.

To go along with this new engine, Zora and his engineers redesigned the 1970 Corvette and solved many of the quality-control problems that plagued the 1968 and 1969 models. Some interior alterations were made to improve seating comfort and luggage access. To stop stone chips, engineers flared the front and rear wheel wells to cut back on road debris kicked up by the tires. Louvers in the front fenders were changed. In 1970, the Corvette had some new standard features, previously optional in other years, such as tinted glass, posi-traction, four-speed transmission and integrated headrests. The exhaust bezels were squared off with large, chrome rectangular extensions. Also in 1970, there were larger side marker lamps and squared-off parking lamps. If an LT-1 engine or 454 V-8 was ordered, a special hood with chrome-simulated vents was included. On LT-1 cars, the hood stripe, available in either black or white, was hand painted in two different widths. The "LT-1" lettering is self-adhesive in both colors with clear to allow the hood color to show through.

GM built 17,316 Corvettes for the 1970 model year; 10,668 coupes and 6,648 convertibles, and installed 1,287 LT-1s, about 7.5 percent of production. Initially, Chevrolet planned to offer air conditioning with this high-revving engine, but the LT-1 would throw off belts at high rpm.

As the value of third generation Corvettes continues to grow, clean, numbers-matching cars like this Cortez Silver will become serious investment pieces. With a strong color combination, an original drivetrain, this C3 is not only a fun car to own, but also a great example of the brand's evolution. Whether you're a seasoned Chevy owner or a potential first-time buyer, don't miss your chance to park this sweet Stingray in your garage!