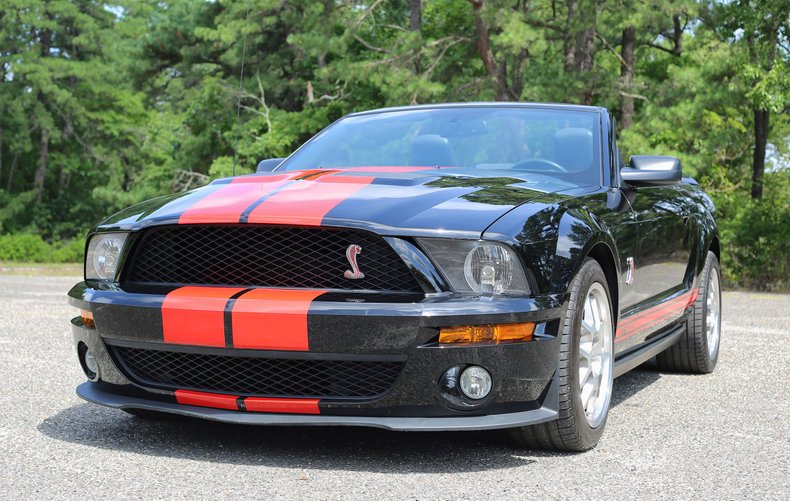 By now, there's no need for a Shelby history lesson. We're all familiar with his contributions to the automotive world and especially the evolution of the Ford Mustang. His cars have always been great to look at and even better to drive, adding a nearly universal appeal to examples like this 2008 Shelby GT500 convertible. One of just 2,070 convertible GT500's built for the model year and one of just 131 to leave the line in Ebony Black with the " Red Appearance Package ", the car is a fairly rare piece any way you slice it and is an absolute blast. Buy it for rarity, buy it for power – just make sure to enjoy it because this car definitely wasn't made to sit still.

The best part of buying a GT500 is the understanding that you're buying an improved version of an already great car. Visually, the formula consists of a standard Mustang GT convertible updated with plenty of exclusive Shelby pieces. Interestingly enough, one of the most striking features came from " Red Appearance Package " Ebony Black paint. A vast majority of the late-model Shelby cars that have have worn brighter hues. The black is a sinister option and, with this much power on tap, flying under the radar isn't a bad thing. Naturally, the factory-sprayed paint still looks great and the body is free of any notable flaws. A black convertible top stretches out over the interior and, when not in use, stows away neatly.

Taking a closer look at the GT500, it's clear that design efforts focused on making the car look larger and more substantial than factory Mustangs. Up front, the wide mouth grille sports a right-justified Cobra badge, while HID headlights fill out of the corners. Amber turn signals are incorporated into the bumper cover, as are deeply inset driving lights that sit just above a composite chin spoiler. The engine bay is protected by a bulging vented hood which matches the overall look perfectly. The side profile wears large Cobra badges with GT500 lettering as well as textured composite side skirts that flow into the texture trim, gracing the bottom of the rear bumper cover. Just above, triple taillights and a chrome faux gas cap sit under a low-rise spoiler, completing the classic Mustang look. The package is aggressive, attractive and something you certainly won't get tired of seeing in your garage.

Inside the car, highly bolstered sport seats with a retro stitch pattern and Cobra logos fit like a glove. A leather-clad steering wheel with convenient thumb grips sports a snake on its hub and includes buttons for the car's cruise control system. Behind the steering wheel, the instrument panel is pure Mustang, and features Ford's infinitely changeable dash lighting. The graphite faces with white lettering have a small SVT logo that serves as a programmable shift light which, along with aluminum accented pedals and an aluminum accented and red-stitched shifter, tips you off to the car's pedigree. The dash around those instruments is some of Ford's best modern work featuring a heritage inspired dual cowl design with gray trim with silver accents. At the center of the dash, Ford's Shaker 1000 sound system features an AM/FM radio, a six disc CD changer, Sirius satellite radio and MP3 compatibility above knobs for the car's climate control. The door panels feature large speakers below satin finished door handles and controls for the car's power windows, power door locks and power mirrors. There are no major visible signs of wear in this interior and everything works as it should, from the ice cold air conditioning to the powerful entertainment system.

Overall, this is a real nice well preserved GT500 convertible. The original owner drove out to Kentucky to take delivery when he purchased it. The car has all the paperwork since new including the original purchase order, temp tag, window sticker, salesman business card, owners manual etc. It's hard to think of a more desirable American car in this price range. Add in the Shelby name, limited production and documentation and this thoroughbred starts looking like a great buy. If you've got room for one of the baddest production Mustangs ever assembled, don't miss the chance to own this awesome 2008 GT500 convertible!