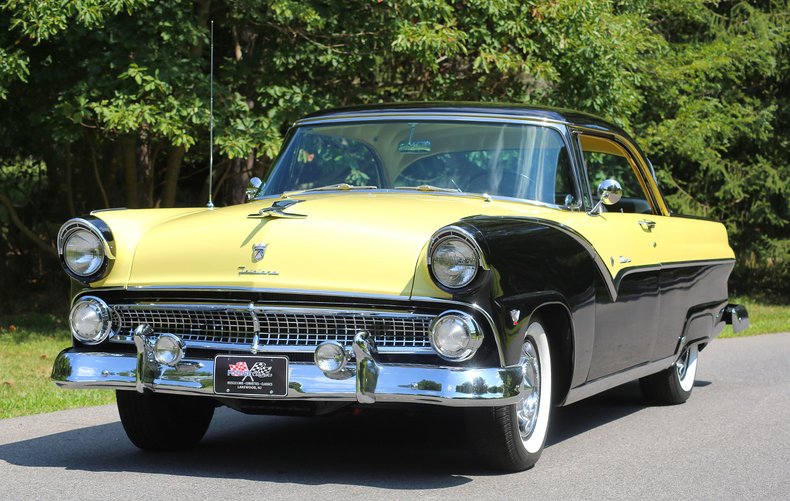 1955 was a banner year for American automobile manufacturers as over 7-million American vehicles left the factory. For Ford motor company, 1955 would bring a familiar statistic that saw them once again finish 2nd behind the Chevy juggernaut, being outsold by nearly 250,000 units. The American Ford line of cars gained a new body for 1955 to keep up with surging Chevrolet, although it remained similar to the 1952 Ford underneath. Standard Fords used a 272 CID version with 162 hp with 2-barrel carburetor and single exhaust. This 1955 Ford Fairlane Victoria is a nice example of why these were the go-to choice for car enthusiasts in the late 50's.

The Fairlane, which received its name from the Henry Ford estate near Dearborn, Michigan, replaced the aging Crestline as Ford's premier full size offering in 1955. This 1955 Ford Fairlane Victoria has received a ground up restoration to sit in the current condition that you see today and is the perfect vehicle to take out on a nice warm summer day. It has received all the upgrades you would want to create a durable cruiser, while keeping the historic look of the vehicle intact. Before we get too far lets decode the VIN tag information.

This first year Fairlane Victoria is covered in a correct coat of Raven Black and Yellow color combination. The combination that is separated by chrome trim looks fantastic under our showroom lights. At the front of the body you have the iconic look of the checkered grille that is flanked by stacked headlights resting on the front of the fender. Below the grille is a body width chrome front bumper that wraps around the front fenders. Above the grille is the Ford crest which hangs in-between a brand new hood ornament and Fairlane text. The hood leads your eyes to a wraparound front windshield. Down the sides of the body feature the signature 'check' chrome trim that separates the red and black. At the back of the car you'll notice fender skirts on the rear tire openings and the jet-tube rear taillights. Finishing off the look, the rear chrome bumper protrudes just far enough to make room for a continental kit.

Powering this 55 Victoria is a 272 2V V8 engine backed by an automatic transmission. Equipped with power steering and power brakes make this Fairlane a pleasure to drive. An upgraded aluminum radiator keeps the engine cool during the summer nights. The electric system has been converted to a 12 volt system. A Ford oil bath air cleaner tops off the engine bay.

This Victoria is impressive regardless of where you look, but the interior might just be the true winner of this ride. Open the door to this '55 Ford and you will reveal a complete two-tone yellow and black vinyl interior that is equipped with power windows and a power seat. The interiors two bench seats are capable of comfortably hauling six people to your local car show. Up front is the new for 1955 dash design that retained the see-through “astra-dial” speedometer that made an appearance in 1954. To the right of the steering wheel are the controls for the Ford Magic Aire system and the AM radio. The interior is comfortable and is a perfect place to log miles from with the top down.

Overall, this 55 Victoria is a well sorted out car that is turn key and ready to cruise. The striking color combination really fits the 50's era. From the fender skirts to the continental kit this car says 50's in every way. If you are in the market for a real nice 55 Ford then this one is worth a look.