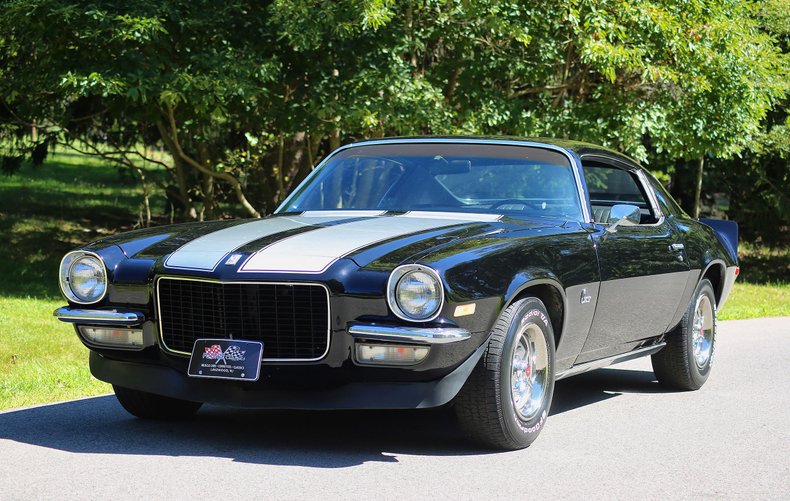 As cool as first-generation Camaros are, it seems that EVERYONE either owns one or knows someone who owns one. And as much as we enjoy watching F1s parade through our doors, it's always nice to see a second-generation car. This fun little 2nd Gen was born a astro blue 307 automatic. The previous owner converted the car to 4 - speed with a 70 CNV code 350 engine. Upgraded with an aluminum intake and 4 bbl carburetor she runs out nice. Jet coat headers and dual exhaust were added as well.

Dubbed "Super Hugger" the second-generation Camaro was an all-new car with its basic mechanical layout familiar and engineered much like its predecessor with a unibody structure utilizing a front subframe, A-arm and coil spring front suspension, and rear leaf springs.The 1970 was the first Camaro offered with a rear stabilizer bar.

The chassis and suspension of the second generation were refined in both performance and comfort; base models offered significant advances in sound-proofing, ride isolation, and road-holding. Extensive experience Chevrolet engineers had gained racing the first-generation led directly to advances in second-generation Camaro steering, braking, and balance. High-performance configurations were initially available, but the marketplace changed as 1970s progressed with fuel crisis, higher insurance rates, and tightening emissions regulations.

The new body style featured a fastback roofline and ventless full-door glass with no rear side quarter windows. Doors were wider to permit easier access to the rear seat, and new pull-up handles replaced the old handles, for which the lower button had to be pushed in to open the door. The roof was a new double-shell unit for improved rollover protection and noise reduction. The base model featured a separate bumper/grille design with parking lights under the bumper, while the Rally Sport option included a distinctive grille surrounded by a flexible Endura material along with round parking lights beside the headlights and bumperettes surrounding on both sides of the grille. The rear was highlighted by four round taillights similar to the Corvette.

The 1970 model was introduced to the assembly plants in February 1970, halfway through the model year. This caused some people to refer to it as a "1970½." model; all were 1970 models. The 1970 model year vehicles are generally regarded as the most desirable of the early second-generation Camaros, since the performance of following years was reduced by the automobile emissions control systems of the period and later the addition of heavy federally mandated bumpers.

Overall, this Jet Black RS 70 Camaro will give you all the fun and looks you could ask for without breaking the bank. The car has a great appearance with front and rear spoilers. Newer BFG tires are wrapped around rally wheels with Chevrolet spinners. All though not politically correct the look was captured. This little 70 runs out good and is a blast to drive and have fun in without any worries that your 6 figure investment might get a chip or scratch. If your in the market for great priced 70's muscle car with a 4 -speed then definitely check this one out.