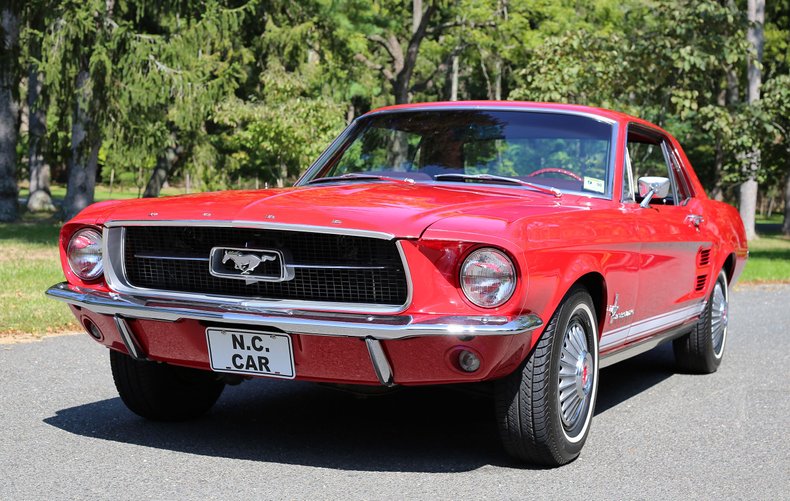 The reason car's like Ford's Mustang and Chevrolet's Corvette are so iconic is because the more they change, the more they stay the same. Their decades' long commitment to a common identity has resulted in a massive consumer base that knows it can ALWAYS find great looks, a power-drenched engine, a fun chassis and a simple but accommodating interior behind either a galloping horse or Chevrolet cross-flags. And it's because of that dogged dedication to being one thing for all people that car's like this 1967 Mustang 289 are even possible.

Back in 2002, Ford ran a commercial with then-president Bill Ford, Jr answering the age-old question: if you could have one car for the rest of your life, what would it be? He chose a Mustang with a “throaty V8”. Given his last name and position, that was probably a pretty easy wish to grant but it certainly isn't that way for everyone. If you've been searching for a solid Mustang coupe with V8 power, this 1967 model may be the perfect answer. The car features a healthy 289ci V8, C4 automatic, manual steering and brakes. Forget show queen – this is daily driver level comfort wrapped in a timeless vintage shell.

Here's how the data plate breaks down according to Ford historian Kevin Marti:

Ford knew better than to alter their beloved pony car too much, so the '67 model featured little more than a handful of revisions over the previous year's offering. Naturally, all those updates are present and ready for show. Up front, the grille remains very similar to the '66 but the vertical bars are gone for a cleaner look. A pair of round headlights frame the centerpiece while a chrome front bumper and clear turn signals round out the fascia. There is no dramatic hood scoop or stripes, just a sleek red hood capped by Ford lettering. Behind the cowl, the glass is outlined by stainless. The side profile offers classic Mustang styling with badges, chrome door handles, a driver side remote mirror, and side scoops with three horizontal sweeps. Year-exclusive rocker trim completes the view. To the rear of the car, tri-panel tail lights frame a chrome gas cap while Mustang lettering adorns the lower portion of the deck lid. Below the bumper, reverse lights, bumper guards, and a license plate recess complete the look.

As the C code in the VIN denotes, this car was born with a 289ci V8 and that's exactly what you'll find there today. Ford rated these engines at a healthy 200hp and, given the size of the car, that equates to a nicely balanced performer. The engine is dressed in Ford Corporate Blue as are the valve covers and the single snorkel air cleaner assembly. Below those pieces lie a single Autolite 2-barrel carburetor which bolts to a correct C6OE-9425-A intake manifold. At the front of the bay, an OEM-style radiator works in conjunction with an engine-driven fan which shares its power source with the alternator. Spent exhaust gases spiral out through correct cast iron manifolds which bolt to a 2-into-1 exhaust system with a transverse muffler. There is a lot of correct hardware here and, thanks to preservation efforts, all of it shows with authority.

This honest Pony car was sold new @ Thomas Motors in Lexington, NC. If you're a diehard Ford fan or a new enthusiast looking for a great first collector car, this Mustang is a great fit. With 289 power and timeless styling, you'll turn plenty of heads without sacrificing comforts and conveniences. If that sounds like a deal to you, get in touch with a quickness. A great Mustang is always worth it!