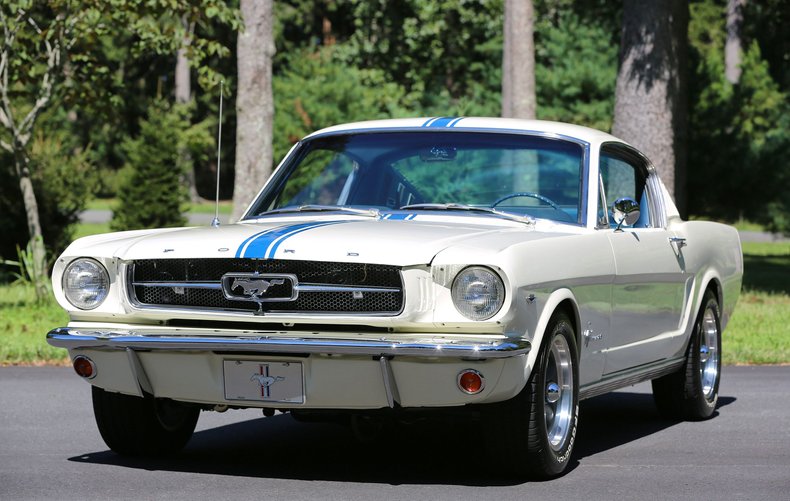 When Ford introduced the new 1965 Mustang on April 17, 1964, only hardtop and convertible body styles were offered. Thanks to the sports-car styling and a list of standard features that included bucket seats, floor shift and full carpeting, the 1965 Mustang was a huge sales success, with Ford dealers selling more than 680,000 during the extended 18-month model year. The fastback joined the lineup four months later, in August, with a sloping European-style roofline, functional interior exhaust vents in the C-pillars and handy fold-down rear seats that allowed stowing long items, like golf clubs or snow skis, through the trunk. Due to the later introduction and higher sticker price, barely 10 percent of 1965 Mustangs were the sportier fastbacks, which were officially called “2+2” by Ford. With great looks and less production, the first-generation fastbacks are among today's more popular and collectible Mustangs. Wimbledon White with a blue interior, this restored 1965 Mustang fastback is the quintessential pony car with its long hood, short rear-deck styling combined with the sleek fastback roof, which was originally sketched by Ford Designer Gale Halderman. The drivetrain is iconic pony-car power: A-code 289/225 HP V-8 backed by a SelectShift Cruise-O-Matic transmission. During the fastback's restoration to factory specifications, the small-block engine was detailed to the correct 1965 colors of a black block and cylinder heads topped by gold valve covers and air cleaner. The fastback is also optioned with power steering, power brakes (converted to disc), full console, backup lights, pushbutton AM radio and American Racing wheels wrapped with BFG radial tires. Original Ford window sticker, owners manual and registrations come with the car. With its classy Wimbledon White paint and peppy 289 power, this 1965 Mustang 2+2 has been driven 55,554 original miles and presents very well in its factory configuration.

Overall, this factory optioned low mileage fastback is a real eye catcher. With it's stunning high dollar Wimbledon white exterior to it's beautiful blue interior this super stang is sure to catch attention. With excellent fit and finish this 2 + 2 fastback reflects how well cared for this low mile example was. We are pushing approximately 5 years since we have had a fastback Mustang here as they are just hard to get your hands on and ones like this just do not come around often. It is nice to have a fastback period but to have one with documented factory options is nearly impossible.

There's simply nothing like keying up a legendary muscle car, especially when it's a Mustang fastback. Looking for some outrageously fun metal that will gain fans wherever it goes? Here's your next classic!