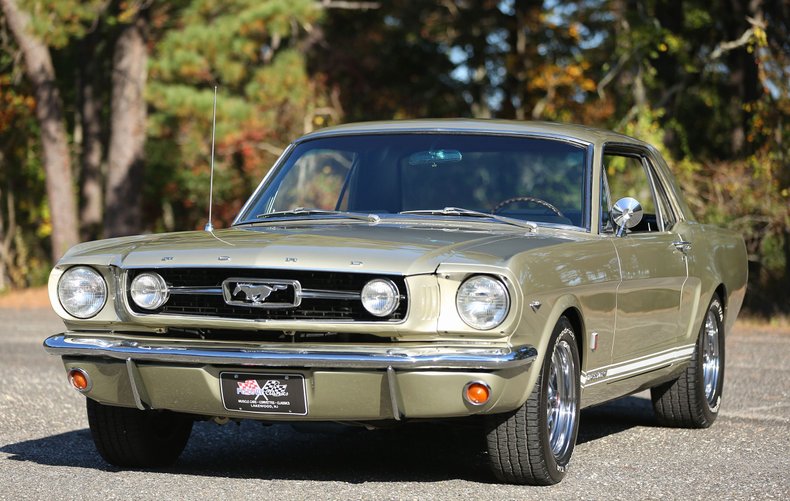 In April 1965, exactly one year after the Mustang's introduction, Ford celebrated its pony car's first anniversary with a new GT Equipment Group option for all-three Mustang body styles: hardtop, convertible and fastback. With the racing Ford GTs competing in international competition to honor Henry Ford II's commitment to beat Ferrari at the 24 Hours of LeMans, Ford wanted to rub some of the race-car image onto its new Mustang. The marketing ploy paid off in 1966 when Ford GTs finished in first, second and third at LeMans, garnering publicity around the world and polishing the Ford Blue Oval's image for both its race program and production performance cars. The 1965-66 Mustang GT package added even more sporty flair to the European-look pony car by including fog lights, side stripes (similar to the ones found on the Ford GT race cars), jewel-like cloisonné GT emblems and trumpet-style exhaust outlets through the rear valance. More than just a visual enhancement, the GT Mustangs also came from the factory with one of the two available 4-barrel 289 CI engines, Special Handling Package, front disc brakes and quicker steering ratio. This 1966 Mustang hardtop takes the Grand Touring concept to the next level with options like styled steel wheels, air conditioning, power steering, fog lights, simulated wood wheel, center console, driver side remote chrome mirror and an AM/FM cassette radio. Built at Ford's central assembly plant in Kansas City, Missouri, the Sauterne Gold Mustang is also equipped with a white GT stripe, deluxe pony interior and factory power windows, a rare find in a GT Mustang. Power comes from the A-code 225 HP, 289 CI V-8 with 4-speed manual transmission. Garage-kept, the Mustang has been well cared for by it's current collector.

There's simply nothing like keying up a legendary pony car. The sound, the feeling of the idle, and the relentless surge of torque as you power through the gears. It's very rare to find a well equipped clean example, but this legit GT A-code Mustang is exactly that. And if you're looking for a highly desirable muscle car that is capable of providing years of weekend fun, but also acts as a great investment, it's your kind of car!