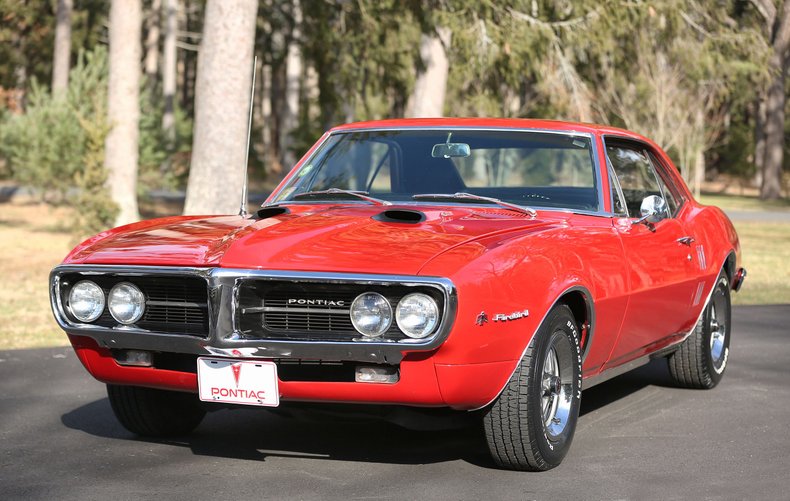 From these early winged designs and concepts to this new arrival car, the 1967 Version, Pontiac has a fan base that is not Mopar oriented, or in love with Mustangs or Camaros. They are true to their brand, and loyal to the Pontiac moniker and the Firebird. The first-generation Firebird had characteristic Coke bottle styling shared with its cousin, the Chevrolet Camaro. Announcing a Pontiac styling trend, the Firebird's bumpers were integrated into the design of the front end, giving it a more streamlined look than the Camaro. The Firebird's rear "slit" taillights were inspired by the 1966–1967 Pontiac GTO.

Originally, the car was a "consolation prize" for Pontiac, which had desired to produce a two-seat sports car based on its original Banshee concept car. However, GM feared this would cut into Chevrolet Corvette sales, and gave Pontiac a piece of the "pony car" market through sharing the F-body platform with Chevrolet.

This 1967 Pontiac Firebird has had a ground up restoration which shows well. The floors appear to be original and are solid. The exterior features newer front and rear bumpers and mostly original trim which is in good condition. The exterior was repainted in Regimental Red (original color was special order O Coronado Gold) and we have some photos of the car during that process. Power is supplied by a 326 V8 engine which is finished in Pontiac Blue with a chrome air cleaner and valve covers ... mechanical jewelry. It is also equipped with power steering, pushbutton AM radio and a center console. The factory black custom interior is mostly all original and still shows well for its age. This Firebird also has a dual exhaust system with cherry bomb mufflers and has a very nice rumble. She is sitting on a set of Rally II wheels with new BFG radial tire which are 205/70 14 in front and 225/70 14 in rear. The trunk is complete with mat, spare, and jack assembly.

It is not very often you get to drive a real nice Firebird from 1967, but this did not disappoint. She lit right up with a turn of the key, sounded great, and ran beautifully. Some nice power, comfortable interior, and great ride with good handling. If you are an early first-generation buff, you really need to take a close look at this great example. This is a good investment grade pony car for sure, and a finished product of an appreciation for the Firebird brand.