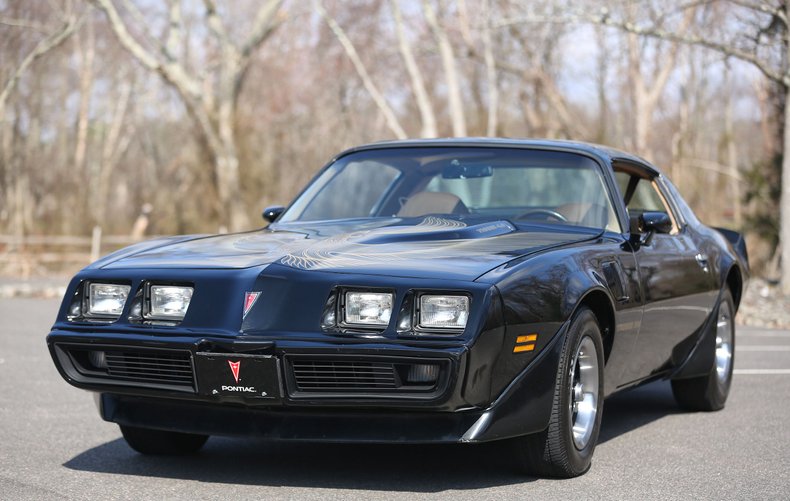 What happens when you take an old school pony car that's experiencing a huge resurgence in popularity, throw in a special edition trim package that's complete with a unique powerplant, and top everything off with mostly original parts? You get this 36K mile turbo Trans Am! By now you probably know how much love there is for collecting and selling second generation Trans Ams, and you might even remember a few low mileage turbo pace cars sold for good money. But, as cool as those clean F2s were, this sinister coupe seems more fitting of the Trans Am's brusque legacy. One of only 3,050 T-top, turbo 'birds built for the 1981 model year, this TA is some of Pontiac's most exclusive metal. And if you're a savvy collector who's looking for some authentic American muscle, it's the car you been waiting for!

Turbo Trans Ams came from the factory as fully optioned cars. And luckily, the sale of this low mileage Poncho includes an original window sticker. Here's a list of highlights of the car that left Miller Pontiac in Rahway, New Jersey.

The turbo Trans Am ushered in a new approach to traditional Pontiac performance, and the appearances of Pontiac's wildly successful special edition packages were updated accordingly. At the front of the car, a pliable urethane bumper hangs instantly identifiable grilles below halogen headlights and a gold arrowhead emblem. Behind those gold-trimmed grilles, a standard-issue chin spoiler flows into a guarded profile that features optional wheel spoilers, requisite fender vents and chrome, flip-up door handles. Above those spoilers, correctly trimmed glass rides below tinted Fisher T-tops. And at the back of the car, a D80 decklid frames correctly trimmed taillights and stainless side-splitter exhaust tips.

Thanks to increasing emissions standards and the 1978 oil crisis, General Motors had to seriously re-think its performance vehicles. That led to some innovative and very creative powerplants. Under this Trans Am's turbo-specific hood you'll find a correct, 4.9-liter V8 that makes substantially more twist than the mighty 6.6 liter it replaced while being significantly more efficient. Originally conceived as an economy offering, the Pontiac 301 was beefed up with a better block design, thicker gaskets, a mild camshaft, lower compression pistons, a rolled fillet crank and an electronic spark controller in preparation for a Garrett TBO-305 turbocharger. Once that turbo was installed, it created a waste-limited 9 PSI of boost and helped the reborn 301 achieve 236 horsepower and a serious 345 lb./ft. of torque. Riding below a factory installed heat shield, that Garrett blower is fed by a high-pressure fuel pump, cooled by a high-pressure oil pump and breathes through a unique, single-plane intake and turbo-specific exhaust manifolds. Those manifolds frame a turbo-specific carburetor and traditional HEI distributor. All the hard parts around the motor, from the belt-driven accessories to the turbo-mandated air conditioning, appear to be factory original. And every belt and hose seem to be in good, working order.

Documented, second generation Trans Am survivors are becoming increasingly hard to find, with the value of correct, well-optioned cars climbing steadily each year. Enthusiasts are turning to these 'birds to round out their garages or using them to build entire collections based on fond childhood memories. With its cool engine, monochromatic interior and sparse original miles, this has to be one of the most exclusive turbo Trans Am's on the planet!