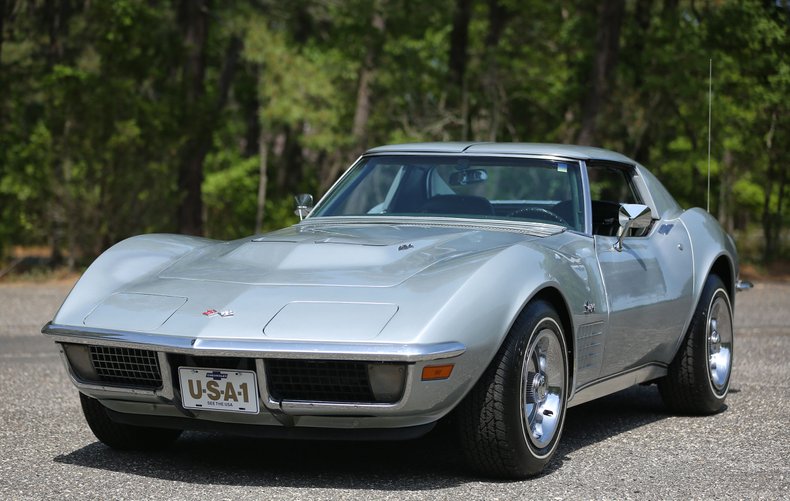 This 1970 Chevrolet Corvette Coupe is finished in a unique color combination which makes its production numbers very low, having been driven just over 60,000 miles over its 52 years. In its third year of production, the third-generation Corvette was enjoying unprecedented popularity, becoming a perennial winner of “Car and Driver” magazine's Best All-Around Car Award. In 1970, it impressed its fans once again, partly on the strength of an ambitious quality-control program instituted by Chevrolet General Manager John DeLorean, but also as a result of a more powerful engine lineup that included the mighty little LT1 solid-lifter small-block and the hydraulic-cam LS5 454/390 HP big-block Mark IV engine. The increase in displacement of the big-block engine was the first since 1966, when Zora Arkus-Duntov bored the original 396 CI engine out to 427 CI. The new 454 CI version shared the same 4.25-inch bore diameter, but it also employed a longer 4-inch stroke to increase torque output to a monstrous 500 lb-ft, 40 more than the otherwise comparably equipped 1969 L36. While it could still shred the pavement, the LS5 engine's hydraulic cam made it more flexible and predictable at low speeds, a feature lauded by “Road & Track” magazine, which described the LS5 as “the most tractable big-engine Corvette unit we've tried.”

This unusual 1970 LS5 coupe combines its 6.9% of production Cortez Silver paint with its Green vinyl interior appointed with custom shoulder belts, a tinted windshield and an AM/FM CD radio. Its matching-numbers LS5 454/390 HP Turbo-Jet V-8 engine is teamed with a Muncie wide-ratio 4-speed, 3.36 Positraction rear end and power disc brakes behind BFGoodrich Silvertown 15 inch white-stipe tires on Rally wheels. Other features include tilt-telescopic steering wheel, power steering, factory air condition, power windows and a dealer installed luggage rack. There's never a bad time to buy a good Corvette, so if you're looking to add an impressive C3 to your collection, you've come to the right place!

As the value of third generation Corvettes continues to grow, clean, numbers-matching cars like this Cortez Silver coupe will become serious investment pieces. With a strong unique color combination, a stout drivetrain and a nice restoration, this C3 is not only a fun car to own, but also a great example of the brand's evolution. Whether you're a seasoned Chevy owner or a potential first-time buyer, don't miss your chance to park this sweet Stingray in your garage!