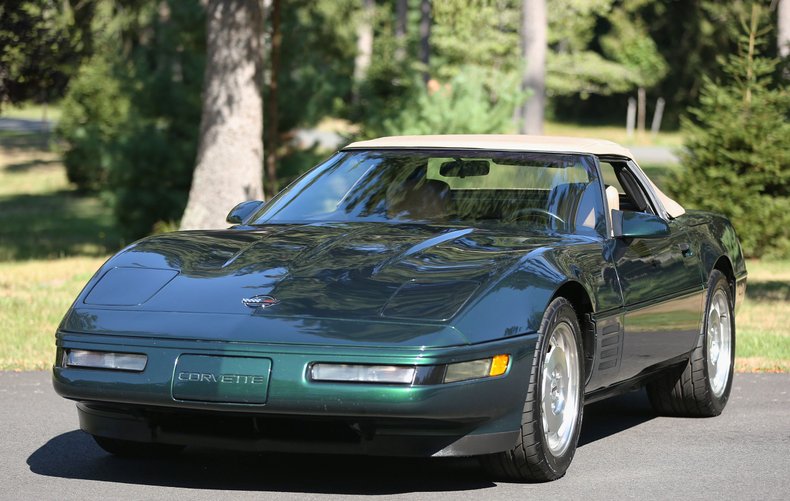 In the year that spanned the first four decades of Corvette production, many esteemed American manufacturers departed from the automotive landscape. Other brands were founded and ran the course of their entire lifespans in that same period. So, when Corvette reached the 40-year milestone though both feast and famine, Chevrolet had cause to celebrate with its 40th Anniversary year.

To Corvette enthusiasts enjoying the car's new-found performance, the standard horsepower had shot from 245 to 300 HP the previous year, followed by an increase in torque from 330 to 340 lb-ft. The Corvette's ride was refined by reducing wheel and tire width, and for the first time in GM history, was offered with a passive keyless entry system.

This beautiful nicely optioned convertible is a remarkable example of this highly sought-after Corvette. It is well equipped with the electronic air conditioning, Delco Bose AM/FM Stereo and six-way power driver and passenger seat that comprise Preferred Equipment Group #1, and augmented with an optional CD player, 6-speed manual transmission and a performance axle. This beautiful C4 convertible comes with original owner's manual and booklet with the 40th Anniversary cassette player. The odometer shows 41,738 and is backed by a clean CARFAX report.

The best aspect of owning a clean, low-mileage C4 is: whether you decide to drive it or stash it, you own a genuinely great car that's capable of comfortably traveling anywhere. While every subsequent generation of Corvette has shared the same set of goals, this one marks the first whole-hearted attempt at transforming America's best sports car into the world's best sports car. Don't miss your chance to take home a fantastic example of one the coolest Corvettes ever assembled.