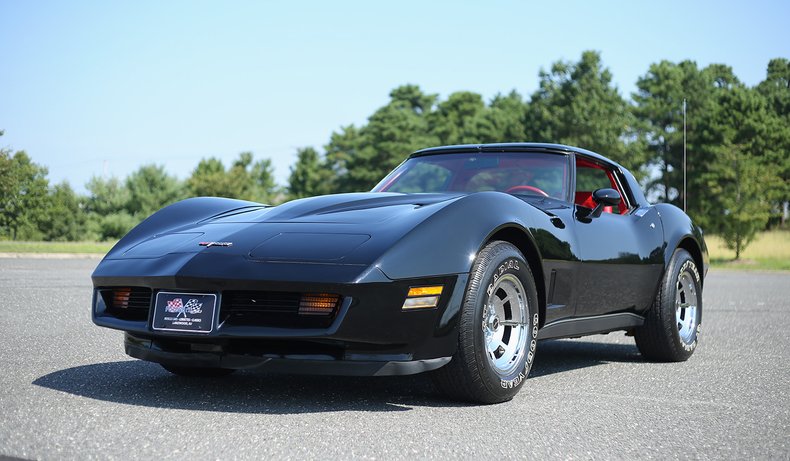 In 1980, both front and rear bumper covers were restyled with brand new integrated aerodynamic spoilers that resulted in a significant reduction in drag and increased radiator air flow. The hood was also restyled as well. The crossed-flag emblems disappeared from the front fenders and were revised to a more elongated style on the nose and fuel door. L-82 emblems moved from the hood to the front fenders on cars ordered with the optional high performance engine. This was the finale for the L-82 corvette emblem, now producing 230 hp but it could not be mated to a 4-speed, as the manual gearbox was offered only with the small block engine. The speedometer in all cars read to a maximum of 85 mph, mandated by a new and controversial federal law. Air conditioning became standard, as did the tilt-telescopic steering column, power windows, exterior sport mirrors, and the convenience group. New was an optional roof panel carrier that would mount to the rear fastback deck.Many weight-saving components were introduced including thinner body panels and an aluminum Dana 44 IRS (Independent Rear Suspension) differential and crossmember. The new lighter unit replaced the arguably stronger cast iron GM 10 bolt IRS differential. In line with further weight savings, the aluminum intake manifold associated with L-82 engines since 1978 was now installed in all cars. For the first time, due to California emission considerations, a unique engine application was installed in cars delivered to that state and was mandatory. This motor was a 305 cu in (5.0 L) V8 engine rated at 180 hp, fitted with new tubular stainless steel exhaust manifolds, and mated to an automatic transmission, also mandatory. The carburetor and ignition timing were controlled by Chevrolet's new Computer Command Control system. The smaller displacement engine was not available in any other state. California buyers were credited $50 as consolation but had to pay for the California emissions certification which was $250. For comparison, the L-48 350 cu in (5.7 L) engine, standard in the other 49 states, was rated at 190 hp.