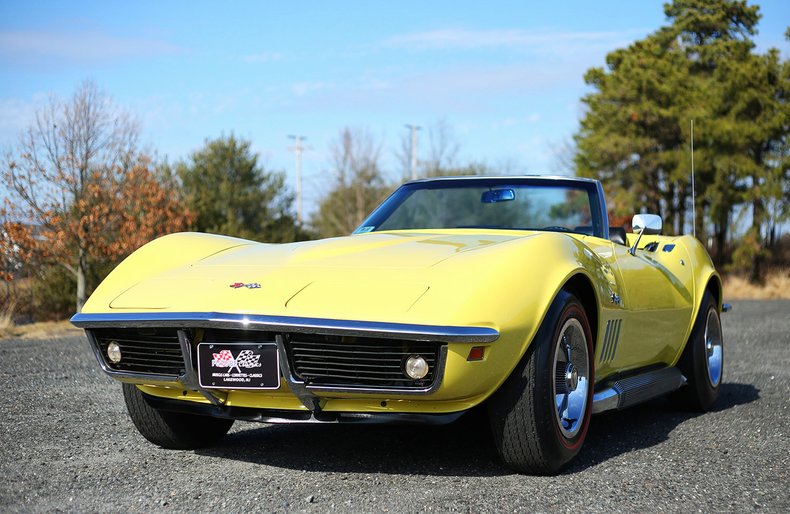 In 1969, small block engine displacement increased from 327 cu in to 350 cu in, though output remained the same. All other engines and transmission choices remained unchanged from the previous year, though the L30 base engine was now the ZQ3 and the L79 motor was redesignated the L46.[8] All cars featured 8-inch-wide steel wheels (increased from 7 inches). Tire size remained the same, although this was the first year for optional white lettered tires and the last for red striped tires. Carried over from the previous year were seven available rear axle ratios ranging from 2.73 to 4.56. Standard ratio remained 3.08 with automatic and 3.36 with manual transmission. The optional Positraction rear axle, mandated on many engine/gearbox combinations, was installed on more than 95% of the cars. "Stingray" script nameplates appeared on front fenders, now one word, in contrast to the “Sting Ray” name used previously. Exterior door handles were redesigned so the finger plate would actuate the door, eliminating the separate release button. Backup lights were integrated into the inboard taillights, headlight washers were added, and front grilles were made all black. Side mounted exhausts and front fender vent trim were options for this year only. On the inside, revised door panels provided additional shoulder room in the C3's tighter cabin and headrests became standard. Steering wheel diameter was reduced from 16 to 15 inches to permit easier entry and exit, the ignition switch was moved from the dash to the steering column, and map pockets were added to the dash area in front of the passenger seat. Accounting for 57% of the cars, coupes with their removable roof panels, began a trend of outselling roadsters. An extended production cycle due to a labor dispute increased '69 volume.