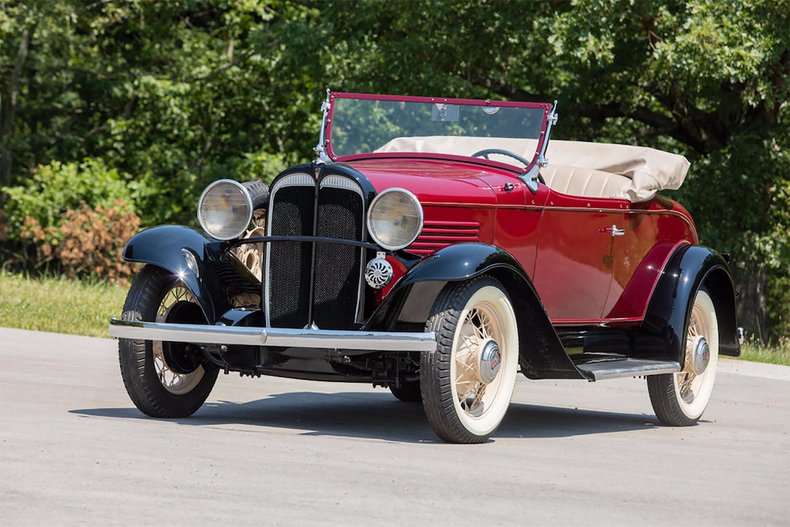 Here is a Willys Model 97 roadster from 1931, built the year before the company founded by automotive pioneer John North Willys staggered into receivership. The Model 97 was built a 110- inch chassis, and was fitted with a proprietary flathead in-line six. Fed by a single Tillotsen carburetor, this motor developed 65 hp, and gave the Model 97 a cruising capability of 60 mph. The Willys 97 offered a three-speed manual transmission and four-wheel drum brakes. Suspension was by beam and live axles on longitudinal semi-elliptic leaf springs, and company ads boasted of "hydraulically-damped shock absorption", as well as something called "Finger-tip control", which allowed the driver to start the car, operate the lighting system and blow the horn - all by a multi-function button on the steering wheel.

Many Willys of the period rolled on wood-spoked "artillery-style" wheels, but this example was fitted with wire wheels. The hood side panels were ventilated with horizontal louvers, giving a different look than the more common vertical louvers or mechanical opening vents seen on more costly automobiles. Some Model 97 Roadsters had rumble seats, others a conventional trunk compartment, as on this example, and buyers could choose either single or double side-mount spares. Fender-mounted parking lamps were also optional.

This attractive example was restored earlier in its life, although documentation is lacking, and was acquired by the consignor from the Don Slater collection in 2007. The car is described as being in good running and driving condition. Paintwork is very good; the body shell being dark red with cream pinstriping, while the fenders, honeycomb radiator and shell, and rear-mounted 13-gallon gas tank are black. The wire wheels are cream and are fitted with Firestone white-wall tires in 4.75-5.00 x 19. Most of the brightwork, including the bumpers and very nice "Willys 6" hubcaps, appears to be in good condition. The interior is cream leather-patterned vinyl with a color-matching folding canvas top and boot, and the trunk compartment is neatly carpeted. The Art-Moderne instrument cluster contains an ammeter, a rotating-disc speedometer, fuel gauge, and oil pressure gauge. The odometer indicates 29,060 miles, although this may not be correct. This rare car would make a wonderful entry on club tours, or an interesting addition to any collection of pre-war American automobiles.