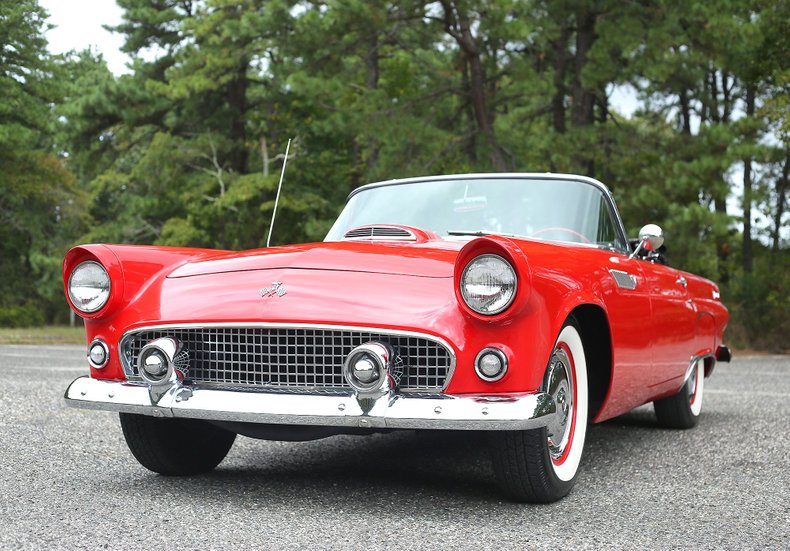 1955 Thunderbird Convertible - A ground up restoration was completed in the late 90's on this beautiful first year 1955 Bird. They're often compared, but Thunderbird wasn't really competition for the Corvette, it was Ford's antidote to the Corvette. Their dimensions were roughly comparable, but underneath the Ford were the bones of a full-size car. That made it much simpler to fit in a standard 198 HP four-barrel 292 CI Y-block V-8 engine. Horsepower ratings were roughly comparable to Corvette's optional 265 V-8, but the Ford made significantly more torque at a lower RPM. Thunderbird sparked the image change Ford had been seeking since its 50th anniversary. Sleeker than the Corvette, it was also more advanced in both styling and equipment.

This gorgeous factory Torch Red Thunderbird has been fitted with vintage A/C along with a factory fit AM/FM cassette player. The retro - style brushed dash displays the factory tachometer. Interior is complimented with two tone red and white power bench seat and finished off with Thunderbird rubber floor mats. This 55 Thunderbird is equipped with optional soft top only. The 292 CI engine runs smooth and power is transferred through the 3 - speed manual transmission. Overall, this Ford Thunderbird showcases all the beauty and charm of the first-year “Baby Bird.” Brightly festooned in torch red, a black soft top and red-and-white interior, it enjoys the added flash of wide whitewall tires with full wheel covers and chrome-trimmed fender skirts. Pop the trunk and this Thunderbird is correctly detailed with a proper spare tire & jack assembly. This Thunderbird's power is exited through dual exhaust which exits out the rear bumper giving this car a distinctive look for Ford's 1955 model year.