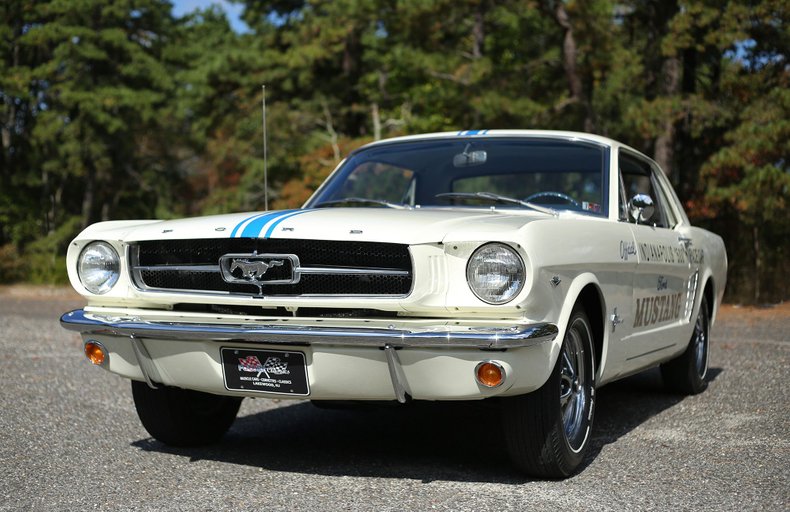 Nineteen sixty-four was a good year for Ford dealerships. With several successful models already on the road, the introduction of the Mustang elevated the automaker's market share almost overnight. In its first month of production, supply was already outstripping demand for the new pony car. As the leader of “Total Performance” the Mustang was selected to pace the 1964 Indianapolis 500. Ford produced 37 pace cars for track and official use and an additional 185 replica pace cars which were distributed through an internal competition between dealerships. Although this 1965 Mustang is not one of those cars, it is a very nice recreation of the Indianapolis 500 cars.

Few cars are more recognizable than first generation Mustangs. With their long hoods, short decks and scalloped sides, they set the pace for an entire subcategory of American cars. This one retains its good looks thanks to the help of it's previous owner, who performed a nice recreation of a Pace Car. As underscored by the door tag, the paint is code M Wimbledon White which was correct for the 1965 builds. The glossy white paint is complemented by a blue stripe centered across the hood and roof and decklid. Across the sides, “Official Indianapolis 500 Pace Car” graphics sit just above the body line while “Ford Mustang” is just below, centered on the doors. Overall, the paintwork looks great and the pace car script is a definite attention getter.

Lift the striped hood and you'll find a nicely detailed 289 cubic inch V8. The second variation of the Windsor engine, these small displacement V8s utilized a 9.3:1 compression ratio to churn out 200 horsepower with a whopping 282 lb. ft. of torque. With a curb weight well under 3,000lbs, that was plenty of power to make these pony cars spirited drivers. This 289 is factory fresh, dressed in an array of period correct equipment. At the top, a Ford Gold single snorkel air cleaner conceals the carburetor which feeds atomized fuel into a correct intake manifold. At either side, cast iron heads are dressed with Ford Gold valve covers that contrast well against the black block. To the front of the engine, fan belts turn a new alternator. Breathing through a set of cast iron manifolds, the engine fires up and has a great vintage sound that is heard through a dual exhaust system.

Open either of this pony car's doors to find a cockpit that's clean, functional and attractive. The car's factory bucket seats wear new blue covers between two piece lap belts and chrome hardware. In front of those seats, the stock dash hangs a full assortment of Ford gauges along with controls for the HVAC system which wears a factory hanging instruction tag. Top dead center, a new AM/FM radio displays your favorite radio channel. Between the seats, a manual transmission wearing an original wood grain shifter ball. At ground level, blue carpeting covers the floors, protected by rubber floor mats with the classic pony logo. Open the decklid and you'll find an equally clean trunk space occupied by a correct trunk mat and covered spare tire.

At the center of the underside, a trusty manual transmission divides the power between four gears, ultimately sending it to the Ford 8-inch differential packed with highway-friendly 2 80 gears. Up front, spherical ball-joints with coil springs held the front end up while the rear was kept in place by longitudinal leaf-springs. At the corners, 14-inch styled steel wheels featuring a “Mustang” branded center cap. Those wheels are wrapped in all american Power Trac bias ply tires for an appropriately vintage look.

Overall, this Mustang Pace Car recreation is not only a blast to drive but is a guaranteed attention getter. A strong running 289 V8 backed by a 4 - speed manual transmission is what gives this Mustang a top choice in the collector car market. So, what are you waiting for? Pick up the phone, park this '65 Mustang in your garage today!