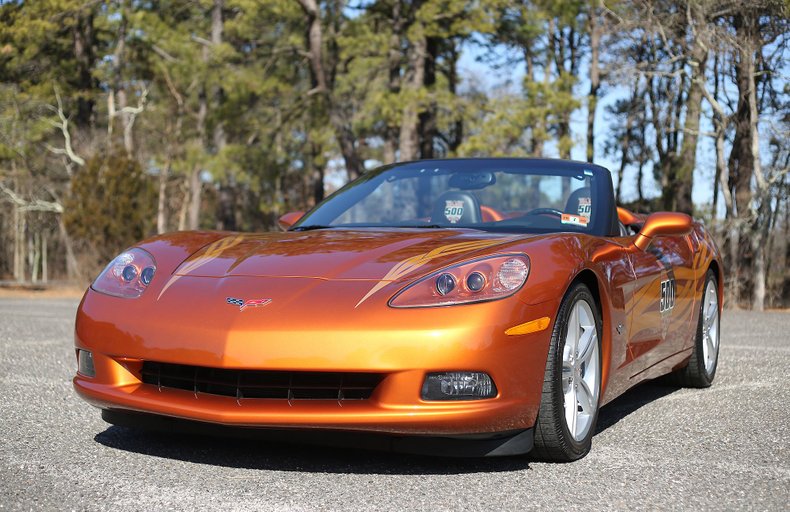 When Andretti Green Racing's Dario Franchitti took the checkered flag at the Indianapolis 500 on May 27, 2007, part of his prize for winning what has been deemed the “Greatest Spectacle in Auto Racing” was a 2007 Corvette Indianapolis 500 Pace Car Edition. For the ninth time in 29 years, Corvette took lap at the Indianapolis Motor Speedway as the official pace car of the Indy 500. And to celebrate the occasion, Chevrolet built replicas to sell to collectors, Indy fans, and whomever else gets in line for one of the 500 special ragtops that Chevrolet rolled out of its Bowling Green, Kentucky, assembly plant.

Powering the 2007 Indianapolis 500 Corvette Pace Car Edition is a 6.0L Chevrolet LS2 small-block engine power rated at 400 HP. Backed by a Borg-Warner T56 Super Magnum 6-speed automatic transmission, the 2007 was capable of 0-60 MPH in 4.1-seconds with a top speed of 186 MPH, certainly fast enough to pace the race. True to form, the 2007 Corvette was also a handler with its Magnetic Ride Control suspension, cross-drilled vented rotor 4-wheel disc brakes—13.4-inch diameter front and 13-inch diameter rear—and Z-rated Goodyear tires. Capable of producing 0.286 g on a skidpad, these cars were visually decked out to the nines with a Z06 spoiler and Atomic Orange paint adorned with Indy 500 gold-ribbon graphics.