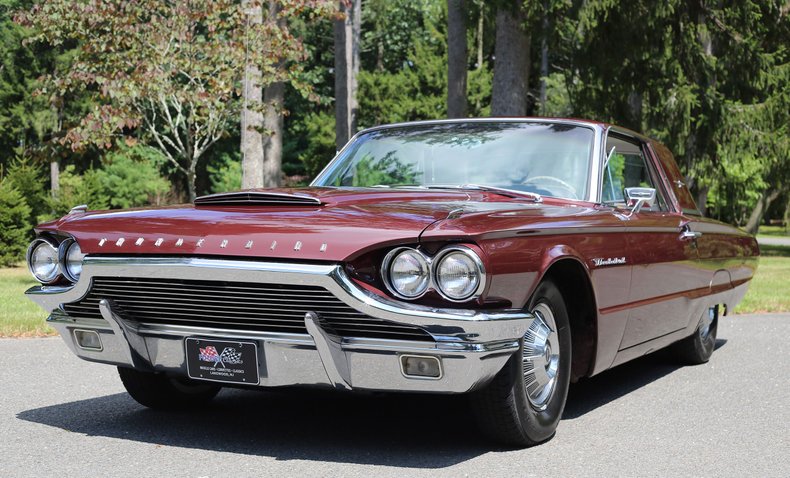 The all new Ford Thunderbird was completely restyled for the 1964 model year. Thunderbird offered the consumer a longer hood and a shorter roofline that most consumers had admired. Some automotive historians have referred to the 1964 Thunderbird's as the sculptured look because of its side view design. The 1964 models were the fourth in the Thunderbird line to be completely redesigned.

The 1964 Thunderbird models were great looking vehicles, and the public thoroughly enjoyed the new features, which included a sculptured body and rectangular taillights that were set inside a massive bumper for extra safety. The car's traditional emblem was a newly styled oval at the center of the bar. The word “Thunderbird” was in script lettering which had appeared on the fender. Thunderbird models were priced at $4,590 for the hardtop and $ 4,955 for the great looking convertible. The 1964/1965 Thunderbird's offered a cockpit-style passenger compartment with bucket seats. Ford advertising dubbed the interior “The Private World of Thunderbird.” The interior featured a swing-away steering wheel along with a future-thinking console that traveled downward and rearward between the front seats. The Thunderbird also offered “Silent-Flo” ventilation for a comfortable, smooth ride.

This Vintage Burgundy 1964 Thunderbird is in great overall condition and has been well preserved. This is a factory Z code 390 4 bbl car that runs out real nice. Equipped with power steering, power brakes, AM/FM radio, console, tilt away steering wheel, rear fender skirts and radial tires. She is finished in a tasteful color combination. The Rose color interior really highlights the exterior. Overall, when you take the wheel of this 64 Thunderbird you enter a new world of luxury and adventure. Thunderbird .... Unique in all the world!

In conclusion, the 1964/1965 Ford Thunderbird models were so popular that the Power Car Company in Mystic, Connecticut made small gasoline or electric models for kids and adults. The company was in business from 1954 to 1967. These miniature 1964 and 1965 Ford Thunderbirds were called Thunderbird Jr. cars. The drive train was a modified Ford starter motor that was connected to the rear axle, and the models were supplied with a 6-volt battery. They were manufactured in two versions -- an electric-powered model for children and a gasoline-powered version for adults.