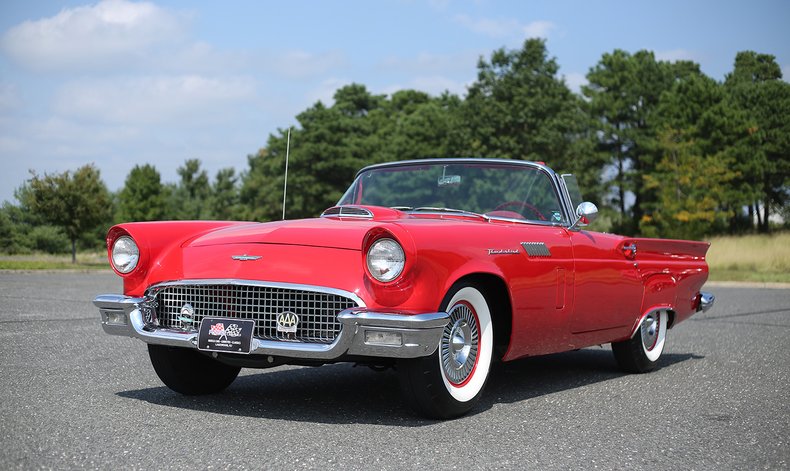 The 1955-57 two-seat Ford Thunderbird is among the most recognized iconic American cars. It's been put in television shows, movies and print advertisements, not to mention being pictured on a U.S. postage stamp.

The 1955-57 "T-Bird" was America's second mass-produced sports car from a large domestic automaker, right behind the Chevrolet Corvette. Smaller U.S. car producers, such as Nash and Kaiser, built a limited number of sports cars in the early 1950s to enhance their image. They saw that British sports cars, such as the MG and Jaguar, drew lots of attention and sold relatively well here. But few of those U.S, sports cars were sold, largely because their producers lacked resources to compete with big automakers..

The Thunderbird was revised for 1957 with a reshaped front bumper, a larger grille and tailfins, and larger tail lamps. The instrument panel was heavily re-styled with round gauges in a single pod, and the rear of the car was lengthened, allowing the spare tire to be positioned back in the trunk. The 312 cu in (5.1 L) V8 became the Thunderbird's standard engine, and now produced 245 horsepower. Other, even more powerful versions of the 312 cu in (5.1 L) V8 were available including one with two four-barrel Holley carburetors and another with a Paxton supercharger delivering 300 horsepower. Though Ford was pleased to see sales of the Thunderbird rise to a record-breaking 21,380 units for 1957, company executives felt the car could do even better, leading to a substantial redesign of the car for 1958.