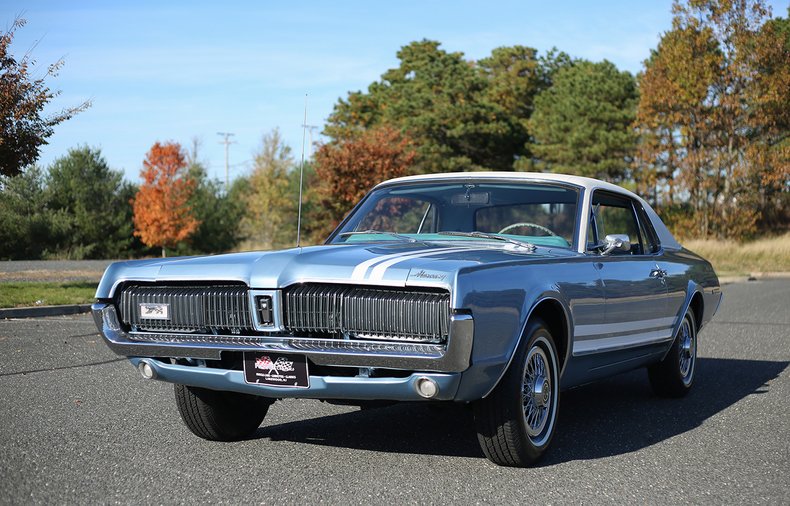 The introduction of the Cougar finally gave Mercury its own "pony car". Slotted between the Ford Mustang and the Ford Thunderbird, the Cougar was the performance icon and eventually the icon for the Mercury name for several decades. The Cougar was available in two models (base and XR-7) and only came in one body style (a two-door hardtop, no center or B-pillar). Engine choices ranged from the 200 hp 289 cu in (4.7 L) two-barrel V8 to the 335 hp 390 cu in (6.4 L) four-barrel V8. A performance package called the GT was available on both the base and XR-7 Cougars. This included the 390 cu in (6.4 L) V8, as well as a performance handling package and other performance enhancements.

The 1967 Cougar, with the internal code T-7, went on sale September 30, 1966. It was based on the 1967 refreshed first-generation Mustang, but with a 3-in-longer (111 in) wheelbase and new sheet metal. A full-width divided grille with hidden headlamps and vertical bars defined the front fascia—it was sometimes called the electric shaver grille. At the rear, a similar treatment had the license plate surrounded on both sides with vertically slatted grillework concealing tail lights (with sequential turn signals), a styling touch taken from the Thunderbird.

This was the only generation with covered headlights. In 1967 and 1968, they were deployed using a vacuum canister system that opened and closed the headlamp doors. For 1969 and 1970, a redesigned vacuum system kept the doors down when a vacuum condition existed in the lines, provided by the engine when it was running. If a loss of vacuum occurred, the doors would retract up so that the headlights were visible if the system should fail.

The Cougar continued to be a Mustang twin for seven years, and could be optioned as a muscle car. Nevertheless, the focus continued away from performance and toward luxury, evolving it into a plush pony car. The signs were becoming clear as early as 1970.